HomeArts/LeisureBeauty and the Beast Jr. at the Roxy brings back fond memories
Arts/Leisure

Beauty and the Beast Jr. at the Roxy brings back fond memories 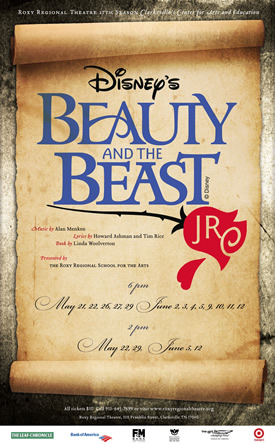 They say your first musical will always be your favorite, and that is the case for me with Disney’s Beauty and the Beast, it was the show that was playing when I first ventured into the Roxy Regional Theatre. Their professional production of this Disney classic sparked a continuing love of Musical Theatre in me.

So, when I heard that the Roxy was planning on staging Disney’s Beauty and the Beast Jr. as part of their 2010 season I was excited as I saw it as as chance to revisit my first musical. And I wasn’t disappointed. Watching those young actors and actresses performing their hearts out, renewed that feeling of wonder that I experienced when I sat in the seats watching my very first show at the Roxy.

The show stars the very talented Humberto Figueroa (Austin Peay State University) as the beast; Hannah Carmona (Western Kentucky University) & Brianna Fuller (Clarksville Academy) will be switching out the role of the Enchantress/Belle for various performances.

Disney’s Beauty and the Beast features some intricate vocal and dance numbers, and the students of Roxy School of the Arts nailed each one of them. Don’t let their age fool you, these students have had a lot of training, and that has allowed their talents to shine. The show features a large ensemble cast, some of whom passes through the audience at various points during the performance.

Each show has standout performers and in the performance I enjoyed, that honor goes Humberto Figueroa, Hannah Carmona, Webb Booth, Kari Muller, Christian Redden, and Haedyn King. All of the performers should be commended for their part in making this a must see show.

The sets were done using painted backdrops in pastel colors, which were accentuated by the stage lighting. Adam Kurtz has done an outstanding job with the lighting & sound on each of the productions he has been involved in.

Beauty and the Beast Jr will be running at the Roxy Regional theatre from May 21st through June 12th at 6:00 pm each night. So gather up the family and go down to see this wonderful show.

Music by Alan Menken
Lyrics by Howard Ashman and Tim Rice
Book by Linda Woolverton
Presented by the Roxy Regional School of the Arts.