HomeEventsCome out and Celebrate Riverfest 2010
Events

Come out and Celebrate Riverfest 2010

James Otto had to cancel his performance due to an illness, Restless Heart has been selected to play in his stead on Friday night.

Join the City of Clarksville and Budweiser along the banks of the Cumberland River as they celebrate Clarksville’s river heritage at the 23rd annual Riverfest Celebration, September 10th-11th, 2010. This FREE, two day music and arts festival features three stages of a variety of local, regional and nationally-known entertainers, delicious food, and fun for the entire family.

Live entertainment will be on four stages all weekend during Riverfest. The music kicks off Friday night at 5:00pm with a great lineup of Christian performers on the Gateway Stage including the multiple Dove Award nominated group Addison Road. A variety of performers to include Diana Pelham, Chris Monhollen, Eden’s Edge and comedian James Fyke will take the Budweiser Stage on Friday night, followed by the Country Band Restless Heart.

The entertainment continues when gates open at 10am on Saturday. The Budweiser stage will feature the Cumberland Jazz Project followed by a special tribute to our military and victims of the September 11th tragedy. On the Gateway stage, watch as local dance academies strut their stuff followed by the Gateway to Stardom talent showcase.

While this year’s entertainment lineup is filled with great performers, Riverfest has tons of other exciting activities too. The Adventure Zone and Toddler Town will be bigger and better this year taking place in the newly opened North Extension of the Riverwalk. This area will feature a petting zoo, inflatables, a rock climbing wall, archery, cooking demonstrations, and even a hot air balloon!

Clarksville Family Magazine is once again sponsoring the Toddler Town which features activities for Children 5 and under.

There will also be a static displays of army vehicles and equipment provided by Fort Campbell.

While enjoying Riverfest, be sure to stop at the River of Culture Stage for a captivating showcase of dances and traditions from various cultures from all around the world. Hula dancing, ballet and martial arts are just some of the things you will find on the River of Culture stage.

The River of Culture area feature a diverse community of entertainment and educational experiences. Participating cultural groups will be sharing the history and the development of their varied cultures through interactive booths. Among the many cultural groups to showcase their way of life will be Brazil, France, Japan, Latin, Panama and Hawaii. Some groups will also be entertaining festival guests with exciting dances, musical performances, and story telling from their own culture. The River of Culture area is sponsored by US Bank.

This year we will have three exhibit divisions: Amateur & Professional Divisions, High School Division, and the new Senior Citizens’ Division. These are featured at various locations in downtown Clarksville including: the Smith-Trahern Mansion on McClure Street, the Customs House Museum on Second Street, and the Downtown Artists Co-Op on Franklin Street. The exhibits are judged and over $2,500 in prizes are awarded.

Join us as we kick off Riverfest Regatta’s 4th year Saturday morning at 10:00am at the courtesy boat dock. Watch as groups attempt to paddle their cardboard boats to the finish line on the Cumberland River. Awards are given out in several different categories. If you and your group would like to be a part of the Riverfest Regatta, go to www.clarksvilleriverfest.com to print out an application form and return it to the Parks and Recreation office no later than September 8th, 2010.

The Lighted Boat Parade is another event you can catch this year at Riverfest. Boats decorated with hundreds of lights and other decorations begin their parade route at the Montgomery County Conservation Club. Jurors at the McGregor Park courtesy boat dock judge the boats in several categories while spectators watch the boats pass by the RiverWalk.

Sit back and watch as the Cumberland River is illuminated in a majestic display of floating lights during the 3rd Annual Riverfest Lighted Boat Parade to be held Saturday, September 11th at 8 pm.  Judging will take place at the McGregor Park courtesy boat dock. The event will be hosted by the Montgomery County Conservation Club. Locations throughout McGregor Park during the Riverfest Celebration will offer public viewing. In the event of inclement weather, boats will be judged at the Montgomery County Conservation Club and boats will not be expected to travel the parade route. Award results will be announced onstage after the completion of the parade. 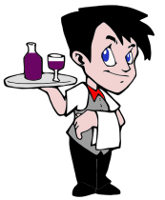 Wait Staff Wars is back- this popular competition, sponsored by Chef Mart is sure to keep you entertained. Local restaurants’ servers will compete to prove they have what it takes to be the best wait staff in Clarksville. Watch servers compete in categories such as Best Balance, Best Memory, Speediest Bussing, Quickest Drink Server, Bartender With the most Flair, Best Customer Service. The contest will be entertaining and just may help you decide where you and your family will dine next time you eat out! It takes place Saturday at 1p.m. in the Food Court.

The festival will be presenting a Corn Hole Tournament. The contest features contestants located across from each other, each one tries to toss their beanbag into their opponents corn hole.

As you can see, you do not want to miss this year’s Riverfest Celebration! Admission to the two day festival is free- thanks to some of our partners Budweiser, US Bank, Gateway Realty, Charter Communications, Daymar Institute, Ragazza Pizza, Clarksville Online, Discover Clarksville, The Leaf Chronicle, Lamar Advertising, Sites & Sutton Marketing, Community Channel 10, Clarksville.com,WAY-FM, Lite 98.7, Newstalk 95.3, 1230 AM, Q108, Eagle 94.3, The Beaver 100.3, and Z97.5.

For a complete list of Riverfest activities and other information please visit www.clarksvilleriverfest.com or become a friend on Facebook!