Clarksville, TN – Well over 20,000 people jammed the banks of the Cumberland River as the City of Clarksville held their annual Independence Day Celebration last night. This celebration of patriotism is one of the most popular events each year.

The patriotism aspect of the evening was heightened with a visit by Captain and Clark the Rand McNally-USA Today Road Rally Team who is in town judging our city for the Most Patriotic category for the Best of the Road contest. Clarksville Mayor Kim McMillan was presented a certificate acknowledging the city’s selection as one of the finalist for the Most Patriotic City spot. The ultimate winner will be announced on July 22nd at the Destination Marketing Associations International conference in New Orleans. Contest winners will land a permanent spot on Rand McNally’s new travel site and a place in the 2013 Rand McNally Road Atlas, as well as on USA TODAY’s Travel site. The five other finalists are Emporia, KS; Fort Leonard Wood, MO; Peachtree City, GA; Rapid City, SD; and Williamsburg, VA.

The evening kicked off with music by Tina Brown, a New York native who has quickly become a Clarksville favorite and frequently performs at events throughout the area. She also opened for Earth, Wind, & Fire and Gladys Knight in Europe!

I didn’t get a chance to see Chris perform as I had to go cover the watermelon eating and speed spitting contest.

The Watermelon Eating contest was first up and groups of various ages competed to see who could eat one or more pieces of watermelon down to the rind first. In each age group the first three people done received a prize of you guessed it, a watermelon. The first place winner also received a gift card.

Next up was the seed spitting contest. The format was the same groups of various ages competed to see who could spit a watermelon seed the furthest. Two by two each contestant took their places on the mark spit two watermelon seeds to see who could send it the furthest. Some of the seeds traveled well over 20’. After the entire group had their turn the Parks and Recreation staff checked the distances to identify the three who had sent theirs the furthest. The winners also received a watermelon, and the first place winner a gift card.

We will be putting out a list of all of the winners, from both contests in the next day or so.

I left before the contest was finished to check out some of the other happenings.

I then spent a bit of time walking down the Riverwalk towards the boat ramp taking in the sights, sounds, and smells along the way. You can see more of what was going on in the attached photo gallery.

John Anderson took the stage so I headed down to snap a few photos of this legendary country music performer with such a distinctive voice.

His career kicked off more than 30 years ago in 1977 with the release of his first single, “I’ve Got a Feelin’ (Somebody’s Been Stealin’)”, he has since charted more than 40 singles on the Billboard country music charts, including five Number Ones: “Wild and Blue”, “Swingin'”, “Black Sheep”, “Straight Tequila Night”, and “Money in the Bank”. He has also recorded twenty-two studio albums on several labels. His latest album, Bigger Hands, was released on June 2009, on the Country Crossing label. Anderson also has a album Anthology available with thirty of some of his best songs.

When Anderson finished performing, it was time for the Fireworks show.

The barge that the fireworks had been launched from over previous years had been rendered unnecessary due to the generosity of the Gregory Family who donated the use of a corn field across the river to launch the fireworks from this year. The resulting savings from not having to rent a barge allowed the city to enhance the show with fireworks that featured larger charges. You can see some of the fireworks in the photo gallery below. The fireworks display was quite spectacular and left people wanting more. 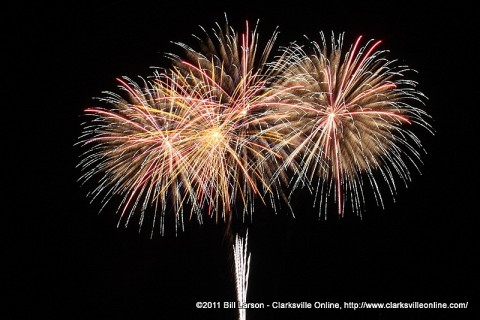 An overview of the 2011 Clarksville Independence Day Celebration

If you have not yet had enough fireworks to sate you, Fort Campbell’s fireworks show will be put on this evening. Come out early to get a great spot, and to fully enjoy the fair, and free concerts featuring Laura Bell-Bundy and Jacob Lyda.

If you are interested in attending and your car does not have an entrance sticker, you must get a visitor’s pass. Enter via gate 4 or 7, and present a valid drivers license and proof of insurance. Everyone over the age of 16 must also present an id to get on the Army post. Once you are on base, follow the signs.