Fort Campbell, KY – For almost 12-miles he has been carrying about 35-pounds of gear. He sees a clock in the near distance with red digital numerals closing in on the three-hour mark, the time limit for the near half marathon march.

He wants to sprint to the finish line, but his face winces with every right step taken. His breaths are heavy and pain can be heard with each inhale. His left leg is in full stride, but his right, being amputated more than six years ago, now pushes forward on a damaged prosthetic; a piston broke a few miles back eliminating fluid motion. He picks up a faster, but still a limping pace.

Sweat drips into his eyes and his fists are clenched tight as he approaches the finish line with two minutes to spare. He stops before crossing, pulls out his canteen, pours water on his helmet and face. He takes a giant step with his left foot and says two words, “Air Assault.” He then takes another step with his prosthetic, exhales and accomplishes his mission. He has just completed the Army’s Air Assault School, on one leg. 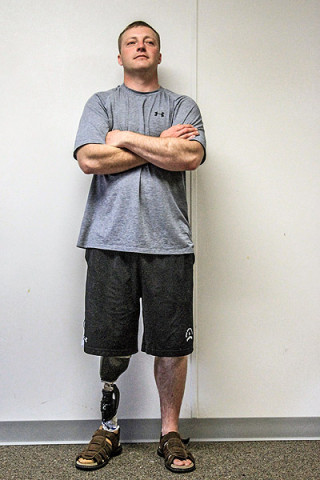 “It’s a really good feeling and I just hope this can inspire other amputees and other people with disabilities that they can accomplish things,” said Robinson, who lost his lower right leg while deployed to Kandahar, Afghanistan during a fire-fight in Operation Medusa, October 3rd, 2006. “My biggest thing today is to let that someone who is laying there wounded in that hospital bed know not to get down on yourself. You can still continue despite missing a limb. A disability is only a disability if you let it hold you down.”

The Army’s Air Assault School is a ten-day course that qualifies Soldiers to conduct air-assault helicopter operations, sling-load missions, fast roping and rappelling, aircraft orientation that ends with a fast-paced, heavy load, 12-mile ruck-march. It is designed to push a service member’s limits mentally and physically. It has been called the hardest ten-days in the Army.

“That was the toughest part, but it’s over with now,” said Robinson moments after completing the 12-miler. “I had problems with my leg during the Tough One, but fixed it and continued.” An air-valve was knocked off during the school’s obstacle portion of the course.

During the ten-days the school’s staff ensured that a professional standard was maintained in regards to their grading of Robinson. There would be no biased actions taken towards or against the amputee Soldier.

“The instructors were a bit nervous when he first started, but they did their job just as if it were any other student and on that note, I am very proud of them; they didn’t see him as a disabled Soldier and treated him just like anyone else coming to school to earn the Air Assault wings,” said Sgt. 1st Class Matthew Connolly, a senior instructor at Sabalauski. “We are very proud of him and I think others need to look at him as a mentor and an example of what you can accomplish when you set your mind on something.”

Prior to attending the physically demanding school, Robinson needed a waiver from the unit’s medical staff. Robinson’s accomplishments continue to surprise and inspire those medics.

“Some of these guys never even learn to walk on a prosthesis, let alone go through the Air Assault course,” said Capt. Gregory Gibson, the brigade nurse with the 101st’s 2nd BCT, who has worked with amputee Soldiers at Walter Reed Hospital before coming to the Strike Brigade. “He’s had this thing happen to him that most would see as a career ender; he’s a shining example that life can carry on.”

Robinson’s momentum continues as he now looks to attend the school’s master rappel course, which qualifies Air Assault school graduates in the skills and techniques necessary to rappel from moving aircraft. His wounded friends are still in his thoughts.

“When I was at Walter Reed I looked around, felt sad for myself, but the more I looked, the more I realized there were so many that had it harder, that had it worse than me,” said Robinson as he spoke of his wounded warrior comrades. “A triple amputee, a quad-amputee and watching them work and push so hard inspired me.” Robinson slowly repeated an earlier phrase. “A disability is only a disability if you let it hold you down.”