Clarksville, TN – Sophomore setter Aubrey Marsellis, of Austin Peay State University volleyball team, has been named the Copies in a Flash APSU Athlete of the Week. 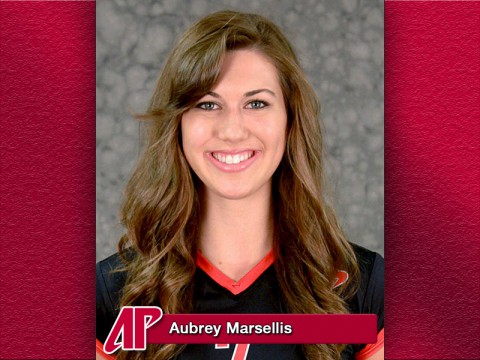 The matches against Southeast Missouri and UT Martin were the first two starts of Marsellis’ Lady Govs career, and she responded by leading the Austin Peay offense to a .219 attack percentage.

The Owasso, OK native posted 49 assists – the highest by a Lady Gov in a four-set match in 2013 – and led the Lady Govs with 16 digs and five blocks in Friday’s win against Southeast Missouri.

Marsellis’ 30 assists and a team-high six blocks in a three-set win against UT Martin, helping the Lady Govs take the lead in the Ohio Valley Conference West Division.

Senior Anthony Bradley, of the men’s golf team, finished fifth at the Bearcat Invitational with a two-under par 214 (69-75-70), leading the Govs to a third straight team title and their first victory of the fall schedule.

Sophomore goalkeeper Nikki Filippone, of the women’s soccer team, made five saves and allowed just one goal in two matches last weekend, including a 3-0 shutout victory against conference-leading Eastern Illinois.