Being awarded spurs inducts a soldier in to the “Order of the Spur” which is a tradition conducted by cavalry troopers dating back to the beginning of the cavalry.

In order to obtain silver spurs, a soldier must complete a “spur ride” which tests a soldier’s mental and physical fitness. The only other way to earn spurs is to serve, in combat, as a member of a cavalry troop and those spurs are gold.

Approximately 300 troopers with the 1st Squadron, 61st Cavalry Regiment, 4th BCT, 101st Airborne Division, stood in formation at Camp Clark, Afghanistan, waiting to be called up and inducted in to the Order of the Spur with the donning of the gold spurs October 11th, 2013.

“I earned my first set of gold spurs in Nuristan [province, Afghanistan], in 2007, but this was my first spur ceremony as the squadron commander,” said Sutton. “We wanted to make this ceremony special so we brought some horses in to give it a little flavor of the past.” 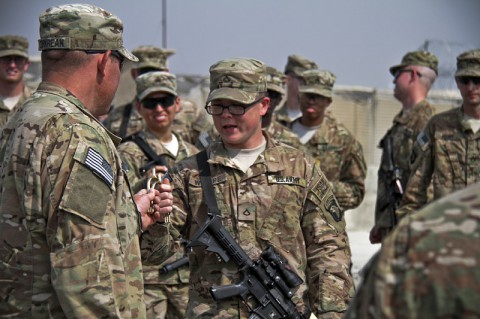 One of the Afghan National Army mechanics who works on the adjoining ANA base, Camp Parsa, was kind enough to lend a few horses to them for this ceremony, making it even more memorable for the first-time deployers and inductees.

“This is my first time deploying and it’s a great honor receiving gold spurs,” said Pfc. John Wempe, a human resources specialist with Headquarters and Headquarters Troop, 1st Squadron, 61st Cavalry Regiment, 4th BCT, 101st Airborne Division, emphasizing how proud he is to be a part of the squadron and prouder still to be inducted in to the cavalry community by being presented gold spurs. 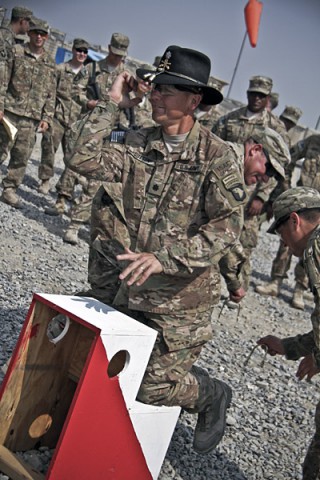 “In the past, cavalry troopers would show expertise in their tasks [in order to earn their spurs],” Sutton explained. “We continue that lineage today.”

“It is an honor, I love the tradition [of the spurs],” said Warrant Officer Jason Harcrow, a soldier with 1st Squadron, 61st Cavalry Regiment, 4th BCT, 101st Airborne Division. Now that he has his gold spurs, he hopes he has an opportunity to complete the spur ride, earning him silver spurs.

“It’s humbling. I have a tremendous amount of pride for all of these soldiers and for what they have done here,” Sutton expressed. “Not only am I proud, I know their families are proud and the American people are proud as well.”