Martin, TN – Back to .500 in Ohio Valley Conference play, Austin Peay State University women’s basketball team closes out the 2014-15 regular season with three of its final four games on the road, beginning with a 4:00pm, Saturday, contest at UT Martin. 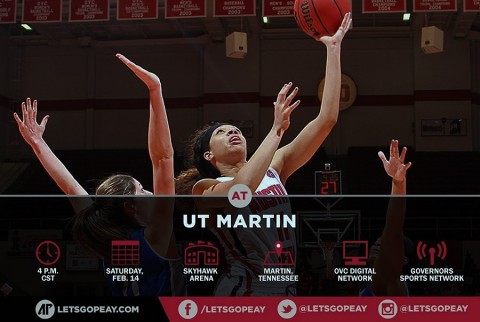 After dispatching Eastern Illinois 83-72, Thursday, to bookend a four-game homestand with wins against Southeast Missouri and the Panthers, Austin Peay now turns its attention to a UT Martin squad that has not lost an OVC game in over a calendar year.

While shooting certainly didn’t help the Lady Govs cause against the Skyhawks last time out – Austin Peay’s 29.4 percent (15-for-51) mark was its worst since 2011-12 – the Lady Govs limited a high-scoring Skyhawk squad to just 71 points and allowed it to hit just 39.1 percent (27-for-69) from the floor, second-worst shooting performance from UT Martin in conference play during the 2014-15 campaign.

Junior guard Tiasha Gray continues to carry the Lady Govs offensively. The Clarksville, TN native made it back-to-back 30-point outings Thursday night, pouring in 31 points against the Panthers for her sixth 30-point night of the season. Gray broke the 500-point barrier in single-season scoring, the first Lady Gov to do that since Whitney Hanley in 2011-12.

The entire Lady Govs squad was solid from the floor against Eastern Illinois, hitting 60.0 percent (30-for-50) from the floor. It marked the first time since February 22nd, 2003 at Southeast Missouri that a Lady Govs team hit 60 percent or better from the floor in a single game.

The Race To Eight

With five OVC wins and five games remaining, Austin Peay continues its march toward the eight-win mark in conference play. The 8-8 record has been important the past three seasons (since the advent of the 16-game schedule in 2011-12), with teams reaching that mark assured a spot in the tournament.

The class of the OVC, UT Martin has not lost a conference game since February 8th, 2014 against SIU Edwardsville and have lost just 21 games in OVC play since Kevin McMillan took over in 2009-10.

After losing the best scoring duo in OVC history with the graduation of Jasmine Newsome and Heather Butler a year ago, the Skyhawks have not missed a beat in moving Ashia Jones to the forefront of the offensive attack; the sophomore from Covington, TN is leading the OVC at 23.2 ppg, a number that jumps to 28.6 in conference play.

As a team, the Skyhawks are hitting 44.1 percent from the floor, nearly three percent better than the next closest number.

Austin Peay (8-15, 5-5 OVC) kept the game close through the opening 16 minutes. The Lady Govs held a lead twice in the half – both times by a point – freshman Brianne Alexander giving them the last of those leads with a pair of free throws for a 24-23 lead at the 5:16 mark.

In the second half the Lady Govs were able to close to within seven points, 45-38, thanks to a three-pointer by sophomore April Rivers with 14:19 left in the game. It was the first of four three-pointers by Rivers – she hit two on back-to-to-back possessions later in the half to move APSU with 12 points with 9:47 left.

The Skyhawks would push the lead back to 18 points late in the half, and held that margin after Ashia Jones’ layup with 4:16 left.

UT Martin would not score again in the contest, but Austin Peay found cutting into that lead difficult. The Lady Govs closed the game with an 8-0 run, a run that could have gone further except for a stretch of more than three minutes where the Skyhawks maintained continuous possession.

Austin Peay made just 29.4 percent (15-of-51) of its field-goal attempts, its worst shooting performance since the 2011-12 season. The Lady Govs compensated with season-highs in both free throws made and attempted, going 26-of-37 (70.3 percent) at the line.