Modeling the crawl, walk, run phase style of training, Soldiers in the company had to score at least marksmen during weapons qualifications on April 6th.

The days that followed encompassed training at the basic and advance levels of rifle marksmanship.

“It started off with our Soldiers getting trained in dynamic breaching techniques with shotguns,” said Sgt. 1st Class Micheal Dufault, first sergeant of the “Maddogs.” “It also included a walk and shoot that culminated the training conducted throughout the week into a competition, which involved a 300 meter flat range with a plethora of different types of apparatuses that they had to move.”

During the best shooter competition, Soldiers bounded from one barrier to another while moving various challenges such as a Skedco litter, a life-size dummy and water cans, all while shooting five rounds at targets increasing at 50 meter increments.

“This was a huge culminating event,” said 1st Lt. Daniel Sullivan, company executive officer. “It was designed to challenge the Soldiers on tasks all the way up to squad level. They ran to different stations, where the first was a react to contact, followed by individual movement techniques, moving tactically, and transporting a casualty.”

Once the squad returned to the start point, they had to work together to complete 100 pushups, 300 situps and 50 pullups, followed by the first sergeant’s mystery event.

“They really pulled together,” Dufault said. “It wasn’t about just beating the guy to their left or right, it was about picking them up and motivate them through to the end.”

Sullivan said the competition gave each individual an idea of what skills they needed to work on, and at the same time, pulled the company closer. 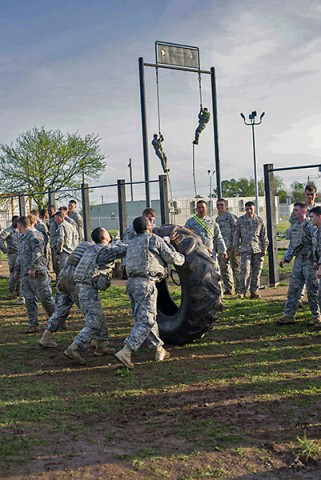 “The amount of cohesion out there when they are being pushed to their personal limits is phenomenal,” Sullivan said. “The company you have now is much more cohesive and stronger than the company that went into it.”

The best shooter and best squad both came from 1st Platoon, but Dufault said he was proud of everyone’s effort throughout both competitions.

“I have so much faith and trust in this company that I am calling out any company in this division,” Dufault said. “If you want to try to take our best of the best Maddog belt, come see me, any time.”