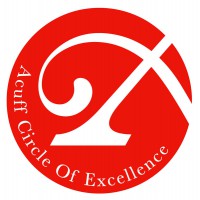 Clarksville, TN – More than 100 arts supporters from Clarksville and Nashville gathered at the Customs House Museum to honor philanthropist Evans Harvill for his long years of promoting arts at Austin Peay State University and in the community, as he received a top arts award.

Eight others were recognized at the same event, the annual Ovation Awards ceremony, sponsored by the Acuff Circle of Excellence. The celebration calls attention to outstanding contributions of the arts in the Clarksville-Montgomery County area.

The Circle is the patron society of the APSU Center of Excellence for the Creative Arts, and it works to advance arts and culture in Clarksville and Montgomery County.

“Without a doubt, our arts community would not be the same without the vision and generosity of this amazing individual,” said Austin Peay President Dr. Alisa White, in presenting Harvill with the prestigious George Mabry Ovation Award. “We are forever grateful to him for his life-long support of Austin Peay and the arts.”

Also receiving awards at the event were:

Business Award: Hand Family Companies for its major support of the arts through donations of money, merchandise and labor, which grew out of the company’s commitment to make Clarksville a better place to live.

Individual Artist: Beverly Riggins Parker, an accomplished artist in photography and painting and a founding member of the Downtown Artists Co-Op and Friends of Photography.

As Ovation winners, the students are eligible to apply for the endowed $1,000 scholarships, established by the Acuff Circle in the Center of Excellence for the Creative Arts.

Harvill, son of the late Halbert Harvill, president of Austin Peay from 1946 to 1966, literally grew up on the Austin Peay campus.

His dad came to Austin Peay in 1929 as a member of the original faculty and the family’s home was on property later acquired by Jenkins and Wynne auto dealership, and which now is part of the Austin Peay campus.

He earned his bachelor’s degree from Austin Peay in 1946, two weeks after his dad was named president. He received his juris doctorate from Vanderbilt University School of Law, and came home to begin law practice with the late Billy Daniel, the firm later becoming Daniel, Harvill, Batson & Nolan. He now is “of counsel” with the Harvill-Ross firm.

Harvill became involved in leadership roles in various community and state organizations, but Austin Peay remained closest to his heart. Through the years, he has been a knowledgeable adviser to each Austin Peay president.

His late wife, Peg, a graduate of Peabody College, decided to take art classes at Austin Peay after their daughter Kitty went to college. From then on, the couple became even stronger advocates for all things art at Austin Peay, and especially for the Center of Excellence for the Creative Arts when it was established.

As a member of APSU’s 75th Anniversary Steering Committee, Harvill commissioned an art student to create a two-tiered view of Austin Peay that depicted changes in the campus since 1949. Peg, who became an accomplished artist, painted portraits of APSU’s historic buildings and limited-edition prints of each were used by APSU as appreciation gifts to major donors. Among those major donors were the Harvills themselves.

In 2010, Harvill set out on a mission to name the state-of-the-art concert hall at the Music/Mass Communication Building for longtime music professors Drs. George and Sharon Mabry. The Mabry Legacy Campaign culminated in 2012 with raising more than $500,000 for fine arts at Austin Peay.

He also established several endowed scholarships in the arts, including designating two just this year in the Center of Excellence for the Creative Arts. His wife Sherri also is a supporter of the arts and is a former board member of the Acuff Circle.