Stucker, of Johnstown, Iowa, becomes the 24th Austin Peay student-athlete to receive the OVC Scholar-Athlete Award since it was first awarded during the 1981-82 academic year. 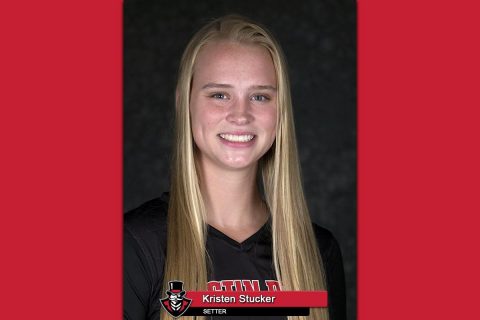 She finished the 2016 season ranked 14th among Division I players in total assists, her 1,338 assists ranking fourth in a single season at Austin Peay while her 10.56 assists per set ranked eighth in program history.

Stucker paced a Govs offense that posted an OVC-leading .223 attack percentage that was seventh-best all-time.

In the classroom, Stucker owns a 4.00 grade-point average after four semesters at Austin Peay while majoring in biology with a minor in chemistry. She has earned the OVC Academic Medal of Honor and been named to the OVC Commissioner’s Honor Roll in each of her first two seasons.

Stucker also is a four-time member of the Austin Peay President’s List, Dean’s List and Athletics Director’s Honor Roll. She also was named to the 2016 CoSIDA Academic All-District Teams in her first year of eligibility for the award.

The OVC Scholar-Athlete Award is the highest individual honor that can be earned by OVC student athletes and is given annually to three men and three women for their accomplishments in both the classroom and athletic arena and because of their leadership abilities.

The six winners were selected from a group of 21 finalists by a vote of OVC’s Faculty Athletics Representatives. Honorees must have performed athletically with distinction, earned at least a 3.25 grade point average and conducted themselves in a manner which has brought credit to the student-athlete, his or her institution, intercollegiate athletics and the OVC.

The award is based on academic and athletic criteria/accomplishments achieved during the 2016-17 school year.