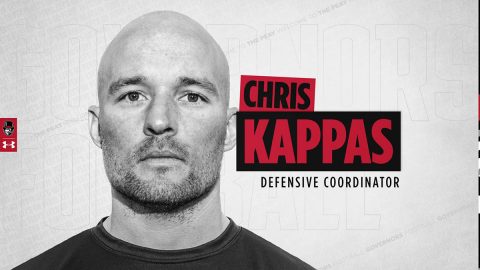 “I am extremely excited to bring Chris in as our defensive coordinator,” said Walden. “He is a winner who has won multiple conference and national championships.”

“As both a highly successful offensive and defensive coordinator, Chris’s background gives him an edge when game planning for offenses. He will bring a very aggressive attack style defense to Austin Peay. It will be a fun system for our players to be in and will free them up to play hard and make plays. Above being a champion on the field, Chris is a champion off the field and will fuel our players with tools to be successful in life,” Walden stated.

Kappas completed the eighth season of his second tenure at Mount Union this fall. During those eight years, he sandwiched a two-year turn as offensive coordinator (2017-18) between six seasons as the Raiders’ defensive coordinator (2014-16, 2019-20). Over those eight seasons, Mount Union reached the Amos Alonzo Stagg Bowl (Division III Championship game) four times, winning the championship twice (2015 and 2018).

“My family and I are extremely excited for the opportunity to join the Austin Peay football family under Scotty,” said Kappas.”It is an honor to lead the defense at a rising program and becoming recognized nationally. We will challenge the men on this team to become the best version of themselves on and off the field, and to set their standards and expectations at the highest level possible. Our goal will be to be the best in everything we do, while doing things the right way with consistency and discipline.

“Scotty is a first class man with morals and values that align directly with mine. I cannot thank him enough for the opportunity and look forward to making an impact on the young men at Austin Peay and the community of Clarksville.”

Two seasons later, Kappas was the offensive coordinator for the Raiders’ 2017 Division III national championship team. He mentored a unit that led Division III in scoring and passing efficiency and ranked second in first downs gained and completion percentage.


A two-time OAC Assistant Coach of the Year (2014 and 2017), Kappas coached 14 D3Football.com All-Americans, and 12 athletes named the OAC’s most valuable athlete in their position group. Over 11 seasons in Alliance, Ohio, he coached Mount Union athletes who earned 32 First Team All-OAC honors.

In between stints at Mount Union, Kappas was a member of the Bowling Green State coaching staff (2011 & 2012), where he was a graduate assistant on defense while earning his master’s degree in sports administration. While there, he was a member of a coaching staff that was one of four FBS teams to record three-win improvements over four consecutive seasons (2010-13).

A 2008 Mount Union graduate with a bachelor’s degree in physical education, Kappas was a defensive back on the Raiders 2005 and 2006 Division III national championship teams and earned Academic All-OAC and 2007 CoSIDA Academic All-District™ honors. After graduation, he joined the Raiders coaching staff as an assistant coach, working with the team’s corners (2008 & 2009) and its defensive line (2010) – aiding the Raiders in their 2008 Division III National Championship campaign.