Clarksville, TN – More size with a pedigree of Division I success is on the way to Clarksville, with Assane Diouf pledging his commitment to join Nate James‘ inaugural signing class. 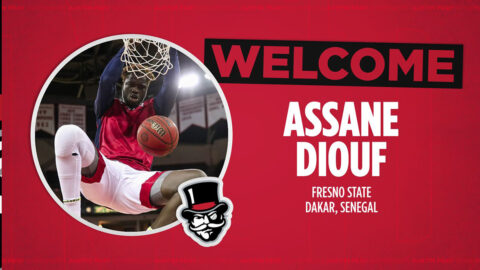 Diouf comes to Clarksville by way of Fresno State, where he spent the past three seasons with the Bulldogs.

After redshirting during the 2018-19 season, he appeared in 25 games in his redshirt freshman and sophomore campaigns, earning a start on New Year’s Day 2020 against a nationally-ranked San Diego State.

When the Bulldogs went young his freshman season, Diouf was one of six freshman rotation players which accounted for 101.7 minutes and 33.4 points per game during Mountain West play.

Originally from Dakar, Senegal, Diouf came stateside with the ambition of earning his education through basketball after playing soccer in Senegal. Prior to his tenure at Fresno State, the nimble big man was recruited by Baylor, Georgetown, Michigan, Wake Forest, Wichita State, and TCU, among others.

“Assane has tons of upside,” James said. “I felt we needed more size and rim protection on the roster, and he provides that from Day One. He spent three seasons in a tough Mountain West, so he knows how to compete at a high level.

“What’s unique about Assane’s situation is that he still has three seasons remaining; sometimes it takes big men more time to develop, so I believe that some of his best basketball ahead of him. He could prove to be a vital part of the team and having worked with my share of talented big men, I’m looking forward to being part of his development.”

Diouf is the latest gem added to a dynamite first class for James and the Govs; he joins Caleb Stone-Carrawell, Cam Copeland, Drew Calderon, Elijah Hutchins-Everett, Noel Scott, and Clarksville product Tariq Silver for the 2020-21 campaign.