Montgomery County, TN – Downtown @ Sundown will feature local artists Emmalee and Nightmasters at this week’s concert at 7:00pm on Friday, May 21st at Downtown Commons.

The first artist to perform Friday evening is Emmalee along with her band. Emmalee was part of Kelly Clarkson’s Team on The Voice in 2020. Her debut single, Fearless, captures the heart of her love for pop music while simultaneously conveying a message of hope and empowerment. 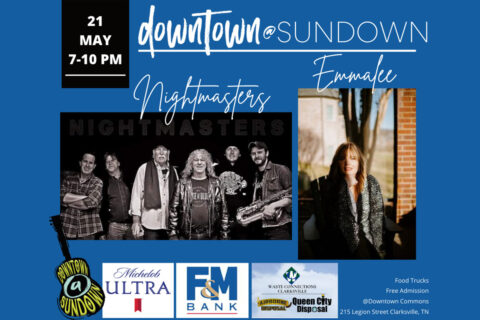 Find Your Fire showcases her edgier side and Cover reveals the vulnerability she possesses in her songwriting. Emmalee’s songwriting and vocal artistry demonstrate her versatility. She released her first EP at the young age of fifteen.

A well-known local favorite, Nightmasters, is a blues band that covers the entire spectrum of blues from traditional to progressive along with Southern rock, rock, funk, pop, and a select dab of country. Nightmasters is a brotherhood of seasoned, multi-talented performers.

This group has performed at Middle Tennessee and northern Kentucky events like Rivers and Spires, Pickin on the Porch, the Franklin Wine Festival, and Red, White, and Brewfest.

Local food trucks will also be set up before and during the shows. Chick’nCone, Driving You Donuts, Burgasm, and Kadi’s Tacos & More are all expected to be on site. Additionally, beer and other beverages will be for sale with all proceeds benefiting our featured non-profit, United Way of the Greater Clarksville Region.

“We estimated about 2,000 attendees at our last concert with Parmalee. I hope the community will come out and show the same amount of love and support for our local talent. We are very excited to host two talented acts as another way to support Hunt and Shop Local Clarksville Week,” said Downtown Commons Event Manager Elizabeth Quinton.

Downtown @ Sundown is brought to you by TriStar Beverage and F&M Bank and sponsored in part by Waste Connections of Clarksville. To stay up-to-date with events happening at the Downtown Commons visit our Facebook page at Downtown Commons and our Instagram page @downtowncommonstn.