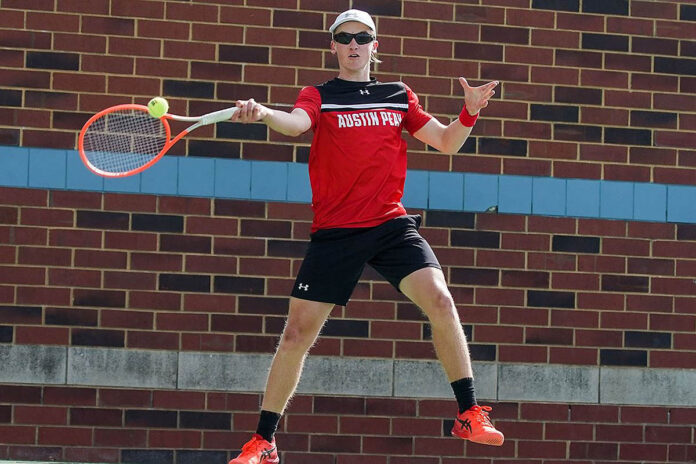 Clarksville, TN – The Austin Peay State University (APSU) men’s tennis team kicks off its fall campaign at the Intercollegiate Tennis Association Ohio Valley Regionals, September 23rd-27th, which will be hosted by the University of Tennessee at the Goodfriend Tennis Center in Knoxville.

The Governors’ last trip to the Ohio Valley Regionals was in 2019, when Anton Damberg led the team with a semifinal appearance in the consolation draw after dropping his first match.

This season, the APSU Govs are led by a pair of seniors in Damberg and Oliver Andersson. A Gagnef, Sweden native, Damberg is the team’s active leader in career singles and doubles victories with 19 and 26, respectively. Andersson is second on the team in career wins with 15 during his time as a Gov.

Thiago Nogueira and Gabriel Nolasco Pozo round out the Govs returners. Nogueira came away with a pair of wins in both singles and doubles play during the spring, while Nolasco Pozo picked up five victories in his freshman campaign.

Tom Bolton, Lachlan Laner, and Hogan Stoker will all make their collegiate debuts at the ITA Ohio Valley Regionals over the weekend.

A Wellington, New Zealand native, Bolton was ranked in the top-10 of the New Zealand U18 junior rankings in Dec. 2020. Laner hails from Woodlands, Texas where he helped lead the Highlanders men’s tennis team to its first State Tournament appearance in 2020. Stoker rounds out the APSU Govs newcomers, he was a three-time Missouri State Tournament qualifier for Lee’s West Summit High School in Greenwood, Missouri.

Draws for the ITA Ohio Valley Regional will be available at a later time, check back at LetsGoPeay.com for that information. For news and schedule updates, follow the Governors men’s tennis team on Twitter (@GovsMTN) or Instagram (@GovsTennis).