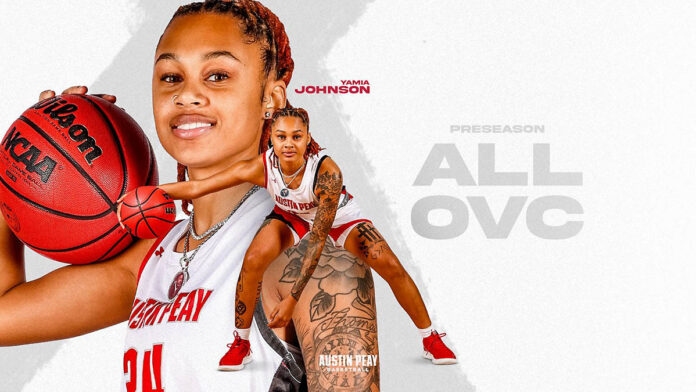 Brentwood, TN – The Austin Peay State University (APSU) women’s basketball transfer Yamia Johnson has been named to the Preseason All-Ohio Valley Conference Women’s Basketball Team, and the Governors were picked to finish fifth in the league’s preseason poll, voted on by the OVC’s head coaches and sports information directors.

Johnson earned First Team All-OVC honors during the 2020-21 season, when she ranked fourth in the league in scoring (14.9 ppg) while playing for Jacksonville State. The Lexington, South Carolina native also led the OVC in three-point percentage (39.4%) and ranked second in the league – behind her new teammate Maggie Knowles – in three-pointers made per game (2.3).

Last season, Johnson scored a season-high 29 points and matched her career-high with seven made three-pointers against Tennessee State, Jan. 24. The 5-11 guard averaged 10.2 points, 2.4 rebounds, and 1.5 made three-pointers per game while shooting 37.7 percent from the floor and 33.2 percent from behind the arc as a Gamecock, she scored a career-high 32 points in her sophomore season against UT Martin (2/8/20).

After a seventh-place finish during the 2020-21 regular season, the Govs were picked to finish fifth in head coach Brittany Young‘s first season at the helm of Austin Peay State University women’s basketball. The Governors were picked to finish ninth in the league last season and the fifth-place predicted order of finish is the program’s best preseason position since a fourth-place selection prior to the 2019-20 season.

Fans will have a chance to get their first look at Young and the APSU Governors during Govs Madness – an open practice and more that fans are invited to attend in support of the upcoming basketball season – 7:00pm, Wednesday in the Winfield Dunn Center.

Doors to the Dunn Center will open at 6:00pm, with giveaways for the fans that arrive early to support the Govs. Once the event begins, members of the Austin Peay State University men’s and women’s basketball teams will compete in a three-point contest and a dunk contest. To wrap up Govs Madness, both teams will play a live scrimmage. Fans are encouraged to sit in the lower bowl of the arena for a close-up view of all the action.

Young’s debut season will begin with a November 4th exhibition against Freed-Hardeman in the Dunn Center at 4:30pm. Austin Peay State University kicks off the regular season with a November 9th contest against Evansville at 6:00pm at Meeks Family Fieldhouse in Evansville, Indiana.