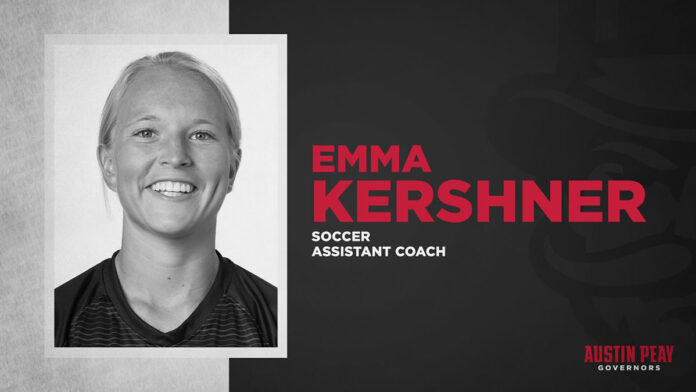 “I am thrilled to add Emma to our staff,” said McGowan. “Not only was she an impact player in her career, she will be an impact coach for our players. She brings a high standard and an unmeasurable work rate that will help level up APSU soccer.”

Before coming to Austin Peay State University, Kershner was a member of the preseason roster of the 2021 National Women’s Soccer League Challenge Cup Champion Washington Spirit.

A native of Centerville, Virginia, Kershner spent the final four years of her collegiate soccer career at Virginia Commonwealth. During her final season, Kershner was named the Atlantic 10 Midfielder of the Year, a First Team All-Atlantic 10 selection, and helped lead VCU to the 2021 Atlantic 10 Regular-Season Championship. Kershner started all 17 games for the Rams as a graduate student and ranked second on the team with five goals and 11 points.

“I am excited to be a Governor,” said Kershner. “I want to thank Kim for this opportunity and look forward to working with this team!”

Kershner also picked up Second Team Virginia Sports Information Directors (VaSID) All-State and Atlantic 10 All-Academic Team during the 2021 season. She scored two game-winning goals during her graduate season, which moved her into fourth all-time in VCU history with seven career game-winning goals, and dished out an assist, which tied her for tenth all-time at VCU with 14 career assists.

During her redshirt senior campaign, Kershner was named a First Team All-Atlantic 10 and a VaSID First Team All-State selection. She led the Rams with four assists and ranked second on the team with five goals during the COVID-altered spring soccer season in 2021.

Kershner had her best goal-scoring season during the 2019 campaign, leading VCU with five goals, five assists, and 15 points. She earned Second Team All-Atlantic 10 honors during her redshirt junior season. In her first season at VCU in 2018, Kershner played in 19 matches and made eight starts, recording three goals and three assists.

Prior to her time in Richmond, Kershner spent two years at Indiana, playing in 15 matches and picking up Academic All-Big Ten honors during the 2017 season. Kershner redshirted during her first collegiate season in 2016.

During her final year at VCU, Kershner served as an intern in the athletic compliance office, gaining valuable experience with NCAA women’s soccer recruiting rules and regulations. She has also worked as a soccer trainer at EVLV – a soccer training program that worked to develop young girls into strong and independent women – and coached the U13 Richmond Kickers girls’ soccer team. Kershner holds a USSF E Coaching License, a United Soccer Coaches Futsal 1 License, and a United Soccer Coaches Goalkeeper 1 License.


Kershner earned her bachelor’s degree from Virginia Commonwealth in 2021, majoring in exercise science and psychology. She will receive her master’s degree in sports leadership from VCU in December 2022.

To keep up with the Austin Peay State University soccer team throughout its spring season, follow APSU Govs soccer on Twitter and Instagram (@GovsWSOC) or check back at LetsGoPeay.com for news and updates.