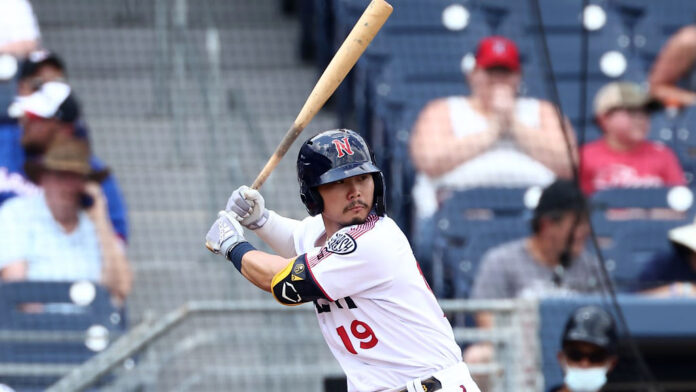 Louisville, KY – The Nashville Sounds were outslugged by the Louisville Bats 9-5 in the rubber match on Sunday afternoon at Louisville Slugger Field.

The Bats hit a couple of home runs in the fourth to pull ahead 5-1. After a Keston Hiura three-run blast got the Sounds within a run in the fifth, Louisville’s Ronnie Dawson hit a grand slam off Zack Brown to give the Bats a sturdy 9-4 lead after five.

For the third time in the series, the Sounds scored first with a run in the opening frame. Jon Singleton singled home Garrett Whitley for the first run. Louisville answered with a leadoff homer to knot things up in the first. Singleton would add a solo shot in the seventh inning for Nashville’s second home run of the afternoon.

Freddy Peralta made his first appearance for the Sounds on his rehab assignment. The righty pitched two innings and settled in after giving up a home run, striking out three. Luis Perdomo excelled in his rehab outing, striking out the side in the third.

The bullpen arms of Matt Hardy, Trevor Kelley and Luis Contreras did their part in keeping a comeback in the cards. Hardy worked a quiet sixth, Kelley pitched a 1-2-3 seventh and Contreras struck out a couple in a scoreless eighth.

Hiura and Singleton had multi-hit games for the Sounds to lead the offense. Brice Turang (1-for-2, R, 3 BB, SB) reached base four times, while Whitley (0-for-2, 3 BB) scored a couple of runs for the Sounds.

The first-place Sounds return to Nashville to start a six-game series against the Charlotte Knights on Tuesday. Left-hander Ethan Small (6-4, 3.34) is scheduled to start for the Sounds. Charlotte’s starter is to be determined. First pitch is set for 7:05 p.m. CDT from First Horizon Park.


The Nashville Sounds are the Triple-A affiliate of the Milwaukee Brewers and play at First Horizon Park. Single-game tickets are on sale now for all home games in 2022. For more information call 615.690.4487 or e-mail .