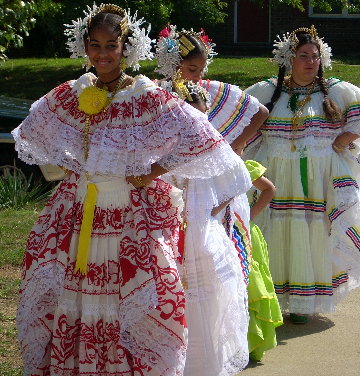 An explosion of sight, sound and color is coming to the Clarksville Fairgrounds in the form of a daylong Latina celebration on Saturday, October 13. Festivities include performances by the colorful Clarksville-based Ballet Folklorico Viva Panama.

Cuarto Festival Hispano De Clarksville (4th Hispanic Festival of Clarksville), sponsored by BNM Productions, will overlay the sound of salsa and merengue in a full day of festivities, music, food and fun for adults and children alike.

The Panaminian heritage is included in this festival in the form of the Clarksville-based Folklorico dance company, which presents a celebration of Panamanian dance and culture. The company is the creation of Vicki Schuler, a professional dancer now teaching a new generation of dancers from her home in North Clarksville.

Shuler, with bright eyes and a broad welcoming smile, stood poised with the stance of a dancer in front of a photo of herself as a young dance artist, explaining her desire to keep this piece of Panamanian culture alive.

“We have a lot of people in Clarksville who come from Panama. many of them are connected to [Fort Campbell]. This is a way of connecting, of meeting each other, and of passing our heritage to our children.” — Vicki Shuler 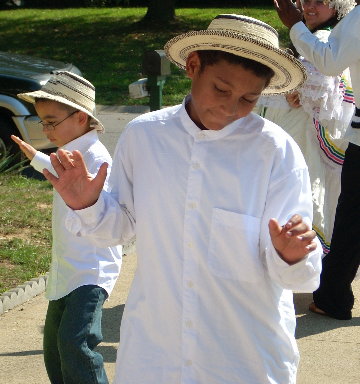 Through the early afternoon, students arrived at the Shuler home, changing quickly into costume before tumbling into the studio for this dress rehearsal. Amid the organized chaos, headpieces are adjusted, the flare of a skirt is checked, jewelry adjusted, and the history of Panamanian dance and costume in explained.

Shuler looked with pride at her young students, watching as they stepped through the paces of dances choreographed in another time and place. Many are simple dances in which the costumes play as large a part as the footwork. Graceful arms movements lift and swirl the flaring skirts as the young men accent the movements and guide their partners. When all the pieces are assembled, the music and the garments become an integral part of the dance experience.

Her daughter, Mildred Vernon, whose three children now dance with the company, said that though her mom was a professional dancer, Vernon never had the chance to dance when she was younger. Now she is active with and committed to this two-year-old troupe, which has also performed in Nashville, in Ohio, and in other venues around the region and country. Vernon said her mother’s dream is to have a community center that will offer the city’s Panamanians a cultural and social outlet that can also highlight their heritage. 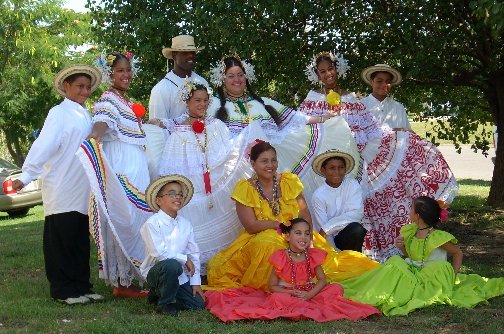 On a bright Sunday afternoon, the dance troop (above), which numbers up to 20, with some dancers as young as four years of age, gathered in a meticulous painted garage lined portraits, press photos, awards, practice costumes and dance trophies. Latin music filed the space as this small group donned their colorful costumes and gathered for a dress rehearsal, a practice session that spilled out of the confines of the garage to the full length of the driveway.

Shuler (left) spends hours making most of costumes worn by her dancers: the brilliantly colored polleras (skirts), starched and pleated, that unfurl with the beauty and arc of a Spanish fan, the shawl-like ruffle that drapes the shoulders, yard upon yard of hand-stitched ribbon and lace trim, and the glitter of gold and multi-color bead jewelry.

The basic pieces of the pollera are the gown or upper part, the skirt or lower part and the petticoat or underskirt. The gown or blouse consists of two ruffles, lace or embroidered in favored color and design edged with lace.

The skirt is fashioned from two wide pieces ornamented with the chosen motif and joined together and bordered with strips of lace. It is very fully gathered on a waist band. Four wide ribbons hang from the waist, two in the center front and two in the back–they are called ‘gallardetes’, meaning ‘graceful streamers’. The petticoat is often as elaborate as the skirt but is always pure white and the trimming is hand-made thread lace.

Costumes historians agree that the ground cloth must be white and the 12 yards of material required to make each ensemble can be fine linen, cambric or voile. The motifs may be formed by birds, flowers, fruit, vines, garlands or native designs. The height of elegance is achieved when these designs are executed in ‘talco en sombra,’ which is hand-sewn appliqué; however, they can be also created in cross stitch or embroidery.

The headpieces worn by the female dancers begin with a traditional gold crown that sits on the top of the head, with a ‘tembleque’ wrapping around the head from ear to ear. The tembleques are intricately wired and woven headpieces containing hundreds of white, crystal and pearl beads, a lush tangle of sparkling ornamentation that is characteristic of Panamanian costuming. The beaded strands are woven in the patterns of birds, insects or butterflies and originally included fish scales.

Some of the dancers have hairpins or ‘knives’ — exagerated, oversized ornaments with a long, letter-opener style blade that is tucked into the wearer’s hair. Vernon explained that these knives were at one time true defensive weapons worn by a woman who might have to return home alone. “Protection,” Vernon explained, demonstrating how this decoration blade could be quickly pulled from the hair and brandished.

While stories abound about the origin of the Pollera, the most popular theory is that it is an adaptation of a gypsy dress worn in Spain at a time paralleling the conquest of Peru; theorists suggest the costuming migrated to Panama via the servants of colonial families (circe1400-1600).

The young men wear plain black trousers, tuxedo-style pin-tucked shirts left loose rather than tucked in, and straw Panama hats that are as much costume as prop. A rack of handmade “practice skirts hang on a multi-tiered rack donated by Fashion Bug. The expensive and intricate hand-made costumes are reserved for dress rehearsals, photos, and the performances. 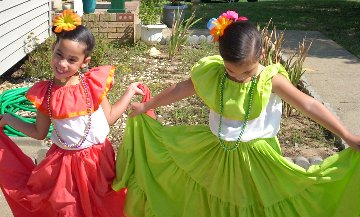 The Latina Festival will run from noon to 10 p.m. at the Clarksville Fairgrounds, and will feature an array of Latin foods.

A Christian Stage will play from noon-2 p.m. and will be sponsored by H.O.P.E. The festival will showcase little known dance groups such as Ballet Folklorico Viva Panama and Little Mexico. Performers include DJ Carlos Llanes, Danny Salazar, Grupo Son Latino, Gemini twins, and more. Sandra Otero will display her handmade jewelry, and Columbian artist Fernando Vargas will exhibit his work.

Admission is $5 per adult, $3 per child under age 10 are admitted free. Vendors will offer a selection of Latin food and beverages.