A Doll’s House: One of the Roxy’s best! 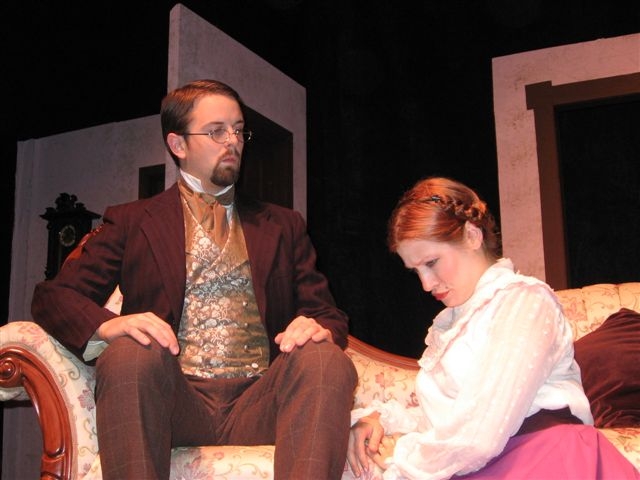 Henrik Ibsen’s A Doll’s House, first performed more than a century ago to scandalized British audiences and once the target of censorship, seems tame by 21st century standards, but there’s nothing tame about this Roxy Theatre production and the power exuded by its cast.

As the scene is set in Act One, we are introduced the somewhat stodgy and condescending Torval Helmer (Matthew Archambault), a bank manager who treats his wife, Nora (Nikki Ferry), as if she were a child, a mental featherweight he teasingly refers to as his “sparrow” and”little squirrel” and other similar endearments. And indeed, in this elegant Victorian setting, Nora emerges initially as a sometimes pouting, childish, seemingly flighty bit of fluff all to happy to spend a day shopping, fluttering through a fairly superficial life and trying to be both secretive and clever about the sweets — the macaroons — she treats herself to behind her husband’s back. It’s all a game, or so it seems, but then the plot — as it always does — thickens. 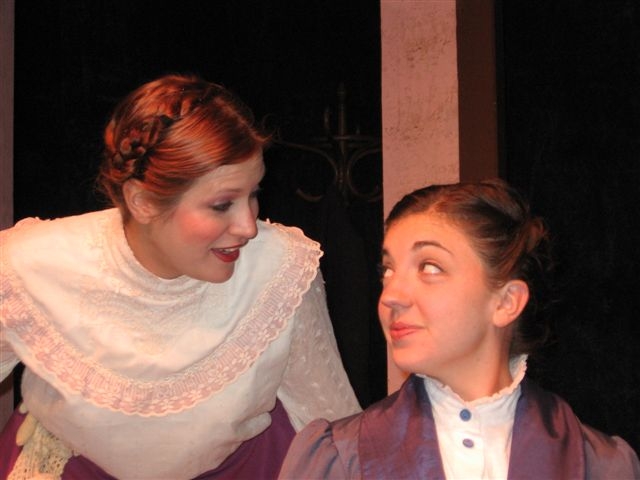 It seems that when Torval was ill, Nora borrowed money on the forged signature of her father, and the time has come to pay up or have her secret and its criminal and social implications uncovered. Enter Krogstad (Joe Sonsenshein), whose bank job is in jeopardy as he asks Nora to intervene with her husband or be exposed. Enter a long lost friend, Christine (Elyse Chambers) , a widow with her own secrets who finds herself taking the job the blackmailer has been fired from. 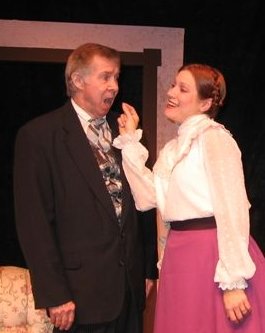 If these twists and turns aren’t enough, Torvald’s longtime friend, an older man and longtime family friend, Doctor Rank doctor (Jay Doolittle, pictured right with Nora), now terminally ill, confides to Nora that he has loved her for a long time. The stage, quite literally is set.

As we move to Act Two, the social fluff, the underpinnings so deftly alluded to, emerge in fast paced dialogue and a flurry of movement that hurls us to the heart of the conflict. Nora, increasingly fearful and tormented, finds her secret revealed to her husband whose harsh, self-centered response pushes her over the edge, fueling her own anger and forcing a confrontation in which she makes a then unheard of choice about her life and her marriage.

William Lewis, in his first Roxy production since 1997, directed this production with a skilled hand, moving his players with an agility and a sense of nuance that has us catching out collective breath. From its lighter weight beginnings, he peels away the layers of each character, intertwining them with an ever escalating pace and smoldering tension, and this skilled cast step up to his expectations with rapid fire delivery of dialogue and volcanic declarations. 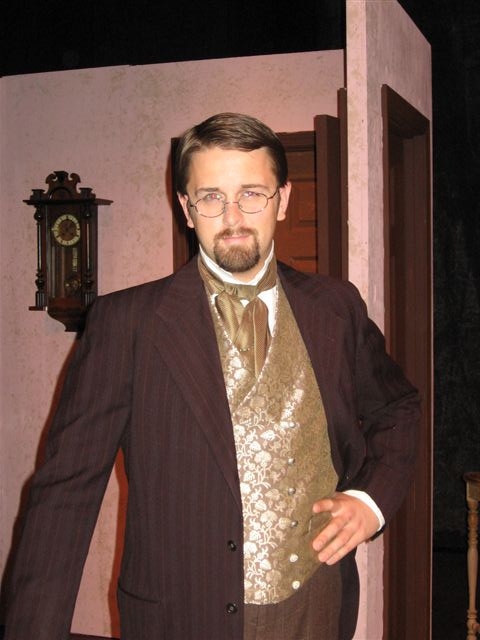 It’s a handsome cast assembled for this performance: Archambault exudes just the right amount of controlling authoritarian “presence” that we instinctively question and dislike his patronizing tone; Ms. Ferry creates a simpering girlish persona that makes us wonder how she’s managed to be wife, mother of three and mistress of a home.

As the widowed friend, Christine, Ms. Chambers brings a quiet elegance to the role, an understated character with enormous strength and a capacity to understand and forgive.

A perennial favorite on the Roxy stage, Jay Doolittle brings a bittersweet touch and slightly lecherous charm to his supporting role as the “dying doctor” role. 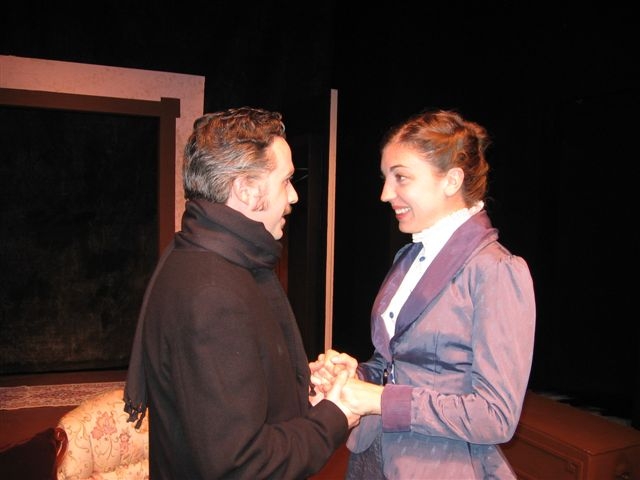 Sonsenshein (at right with Ms. Chambers) brings a crisp, agititated edge to his role as the frantic employee and keeper of Nora’s secret. Linda Speir, nanny to the unseen children who reside offstage, moves among the players, gradually revealing her own tragedy of giving up her own child to work taking care of the children of others. Together, and under the skilled hand of their director, they create an ensemble cast that takes this production to new high for the Roxy.

The set design was a simple floor plan that allowed the cast to shift from Torvald’s den to the larger parlor area, with a hallway running across the back that allowed the cast to interact with the offstage children and provide the doorway from which the characters entered and exited the home. Lewis continually moves these characters in and out of doors, around the beautiful Victorian chaise that is the parlor’s focal point, the anchor of all the scenes.

When A Doll’s House first opened on British stages in the 19th century, it was for a time a “banned” play for its audacity in challenging the cultural norm of marriage, the male “ownership” of women, and outrageous act of allowing a woman a voice and a choice about how she will her life. It is widely considered to be the first feminist play.

A Doll’s House has been filmed several times, once with Jane Fonda as Nora in a production that stayed on television, and a feature film with Claire Bloom. Both are available on DVD. Nothing, though, compares to seeing this production live, and the intimacy of the Roxy is the perfect setting for the intimacy of these lives so delicately intertwined by playwright Ibsen.

A Doll’s House runs through November 24. Tickets are $15 ($10 for age 13 and under). For reservations, call the Roxy at 931-645-7699 or visit the Box Office on Franklin Street in downtown Clarksville. Box office hours are Monday through Friday from 9 a.m. to noon.