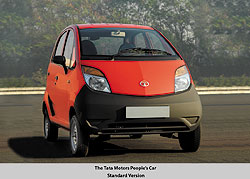 Mr. Ratan N. Tata, Chairman of the Tata Group and Tata Motors, has unveiled the ‘NANO’, affectionately dubbed “the People’s Car”from Tata Motors. It is a development that India and the world have been looking forward to, a development, which signifies a first for the global automobile industry, the People’s Car brings the comfort and safety of a car within the reach of thousands of families. The People’s Car will be launched in India later in 2008. 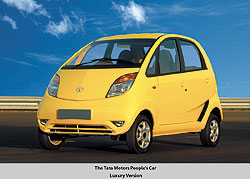 Speaking at the unveiling ceremony at the 9th Auto Expo in New Delhi, Mr. Ratan N. Tata said, “I observed families riding on two-wheelers – the father driving the scooter, his young kid standing in front of him, his wife seated behind him holding a little baby. It led me to wonder whether one could conceive of a safe, affordable, all-weather form of transport for such a family.” Tata Motors’ engineers and designers took four years to realise this goal, ultimately producing a car which is affordable, yet built to meet safety requirements and emission norms, to be fuel efficient and low on emissions.

Designed with a family in mind, has a roomy passenger compartment with generous leg space and head room. It can comfortably seat four people via four doors with a high seating position that simplifies ingress and egress.

The car is a mere ten feet long, with adequate ground clearance, and can effortlessly manouver on busy roads in urban and rural areas. Its mono-volume design, with wheels at the corners and the powertrain at the rear, enables it to uniquely combine both space and manoeuvrability, which will set a new benchmark among small cars.

When launched, the car will be available in both standard and deluxe versions. Both versions will offer a wide range of body colours, and other accessories so that the car can be customised to an individual’s preferences.

Environment-friendly
The tailpipe emission performance exceeds regulatory requirements. In terms of overall pollutants, it has a lower pollution level than two-wheelers being manufactured in India today. The high fuel efficiency also ensures that the car has low carbon dioxide emissions, thereby providing the twin benefits of an affordable transportation solution with a low carbon footprint.

About Tata Motors
Tata Motors is India’s largest automobile company, with revenues of US $ 7.2 billion in 2006-2007. With over 4 million Tata vehicles plying in India, it is the leader in commercial vehicles and the second largest in passenger vehicles. Tata Motors and Fiat Auto have formed an industrial joint venture in India to manufacture passenger cars, engines and transmissions for the Indian and overseas markets.