‘Holy Scriptures as Justification for War’ author to present book

Dr. Bert Randall will present his book, Holy Scriptures as Justification for War on Tuesday, April 15 at 2 pm in APSU’s Woodward Library (third floor). Interested parties will have a chance to order the book for almost 50% of the retail price. The cover art work by APSU senior art student Kim Balevre shows the dove still flying although it has several swords in it. 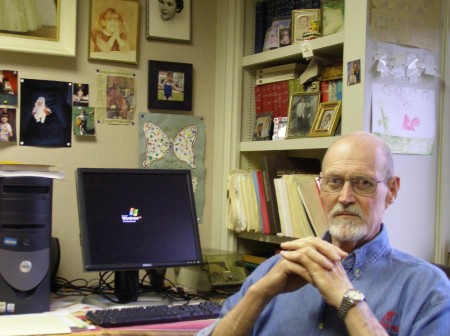 Holy Scriptures as Justification for War focuses a lens on the relation between Holy Books (Scriptures) and war. Throughout their histories, Jews, Christians and Muslims have used their Holy Books to justify external violence against the “enemies of God” and internal purges to purify the faith from heresy. This study explores the beliefs in literalism and inerrancy that are the interpretative principles necessary for such justifications. Randall begins with ten representative passages from the TANAKH, New Testament, and Qur’an that are used to justify divine violence and critiques their misuse by literalists. He goes on to explore the origins and histories of these great scriptures,examining the factual and logical flaws in literalism and inerrancy that result in perverting scripture to justify Divine violence. 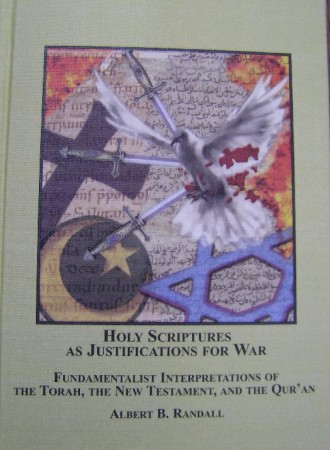 The book offers an analysis of the origins and theology of Holy War in the Bible and offers a resolution to the violent God who commands genocide in the Old Testament and the God Jesus preached. It also explores in detail the doctrine of jihad in the Qur’an and its distortion by extremists and terrorists.

Wrapping up the discourse, Randall scrutinizes one of the most contentious beliefs among Abraham’s quarrelsome children: Who are God’s Chosen People? It concludes with a historical, scriptural, moral and theological argument for Chosenness that rejects Holy War because it is a perversion of God’s creation.

“Your soldier is the one who values peace more than anyone. The military may be the only place left with any honor and courage left.”

He proudly displays a certificate of honor he was given by Ft. Campbell for his work done there.

Dr. Randall, philosophy teacher for 37 years at APSU, has spent 30 years arguing that it’s not important for religions to have the exact same belief, but to recognize and share the same values that are the core for all major religions. He also argues that religions have given our cultures very important sources of very important values which are:

Called by some a Joseph Campbell of the South, Dr. Randall says that the spiritual values which Jesus taught is found in most of the world’s great religions, especially Buddhism.

In the foreward of this text, Royce P. Jones, Ph.D., Capps Professor of Humanities Emeritus at Illinois College, writes:

“The interpretive issues explored in this study are crucial, for the very character and development of religions is a function of, or follows from, the interpretation of believers of their Holy Books. This point is significant for both believers and nonbelievers, for religions are not simply the private affair of those who adhere to them, but, in addition, movements which play a role in determining the character of a people, the social and foreign policy of nations, and, in the end, the level of violence in the world. If the latter point seems large, one only has to remember that leaders who take their countries or their followers into conflict attempt to justify their actions and appeal to perceived religious values in the process. If Professor Randall’s thesis in this study were to come to be widely recognized as true, the Holy Books of Judaism, Christianity, and Islam could not be successfully used to justify violence.”

Dr. Bert Randall received a B.S. in mathematics, Maryville College, TN (1964); an M.Div. in Theology, Louisville Presbyterian Theological Seminary (1968); an M.A. (1970) and Ph. D. (1973) in philosophy, The University of Oklahoma. He taught for 37 years at APSU and was named Professor of Philosophy in 1981. He served one term as Chairman of the Department of Philosophy, two terms as Chairman of the University Assembly, two terms as President of the Faculty Senate and as a member of the Academic Council. He teaches at least two courses a year at the APSU Educational Center at Fort Campbell, Kentucky. He recently developed and teaches two courses in APSU’s new Masters of Military History: The Battle for God: “ihad, Herem and Other Theologies of War and Peace and Islam as a World View.

Among the awards and grants he has received are the following: Hawkins Award for Excellence in Scholarship (APSU, 1993), six APSU Tower Grants, grants from the American Center for Oriental Research (Amman, Jordan), the National Council for US-Arab Relations, the Joseph J. Malone Foundation in Arabic and Islamic Studies, Aramco, the Riyadh and Jeddah Chambers of Commerce, and APSU Faculty Development for study and travel. On these grants he has traveled to Syria and Kuwait (1993), Jordan, Syria, and Israel (1994-95), Egypt and Yemen (1995), and Saudi Arabia (2006). He has twice been the APSU nominee for the Carnegie Foundation Professor of the Year Award (1996 and 1997). He received The Annette Cox Humanitarian Award given by the Bahais of Clarksville (1998), The Peace Award from the Nashville Bahai Spiritual Assembly (2003), Certificate of Recognition from the Clarksville Police Department for In-Service Seminars on Islam and Arab culture and Certificates of Appreciation from the 1st Brigade (Bastogne Brigade) Combat Team, 101st Airborne at Fort Campbell , the 5th Special Ops Officers and several other brigades for training sessions on Islam and Arab culture before their returns to Afghanistan or Iraq.

Among his scholarly activities are the following: appointed an associate editor, Explorations: Journal for Adventurous Thought (1995); 45 presentations to professional societies including the XVIII World Congress of Philosophy , the 3rd International Conference on Persons, and the 4th International Conference on Persons; twenty-nine articles published in professional journals; and was twice invited to address the National Meeting of the Gabriel Marcel Society (1992 and 2002).

He gives more than three dozen talks to educational, civic, community, and religious groups a year and has written a a column on religion, Beyond the Barricade, for the Leaf-Chronicle for two years. He also wrote a monthly column on Islam, Christianity, America and the Arab Middle East for Our City. He presented numerous sessions on Islam to various Brigades at Fort Campbell prior to their return to Iraq September 2005 and continued those training sessions with the officers of the Night Stalker Brigade at Fort Campbell.

He says he is married to a Medievalist, Dr. Jeanie Page Randall, APSU Associate Professor of English.