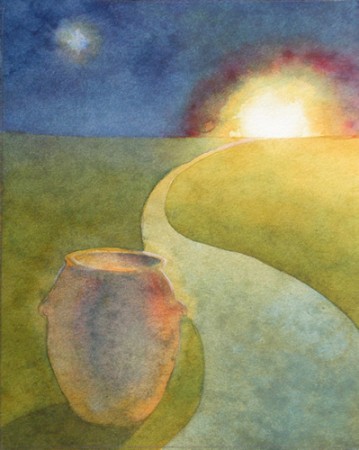 As a junior in high school, at the age of 16, I made a commitment to God. I find that I desire daily literature that gives me a spiritual direction. I continue to read the Bible for spiritual illumination, and recognize it as one source of information and understanding.

A few days ago during my “quiet time”, I had an epiphany as I read Luke 24:13-35. Epiphany is used in two ways: it is an annual festival of Christianity that starts on January 6, and commemorates the revealing of Jesus to the Gentiles as personified by the Magi, and the baptism of Jesus. It is also much more personal: Epiphany is also a moment of sudden intuitive understanding, a “flash of insight.”

I have read this scripture annually on my spiritual pilgrimage. Today it revealed a new thought, that of home. I have never over the years understood this scintillating story in the framework of “Home.” The two saddened disciples in this story were going to their hometown, on a path towards a home-cooked meal and a welcome to the their family.

Wes MaGruder presents presents a fresh view of the passage in comments in The Upper Room [March/April 08 pg 32]. His commentary follows:

Ebede is a young unmarried man who works in my office in the capital city of Cameroon, Yaounde. He was given a week off from work, so I asked him how he would spend the time.

“I’m going to my village,” he said excitedly.

In Cameroon, Central Africa, returning to one’s home village is not simply a physical voyage; it is a spiritual and emotional retreat, a return to what is most important in life. Ebede’s village is only 70 kilometers from Yaounde, and there he is able to visithis aging father, drink palm wine with the village elders, and eat traditional food. I knew that when Ebede returned to work his spirit would be renewed.

It is interesting that the response of some of Jesus’ disciples to the death of Jesus was to go to “a village called Emmaus.” Did they return home, where they could calm the confusion they felt inside and reorient their lives?

Regardless, when they reached the village, they found what they needed. Jesus was revealed to them as they broke bread together. He was alive, and he gave them peace and hope. When they returned to their city, their hearts were burning and their spirits were renewed.

As we meditate on this scripture and commentary, may we be led to and encounter God’s presence in fresh, new ways. Here is an epiphany that reconnects us to spiritual resources and spiritual renewal.

The art displayed with this story is Epiphany Times Three by Kathrin Burleson.

Rev. Charles Moreland
Rev. Charles Moreland, retired, has lived in Clarksville for seven years and holds great pride in his adopted city and its people. His one objection in Tennessee is the Hall law of taxes on dividends and savings. Charles served in the U.S. Army Chaplaincy from 1966-1986, retiring to serve as a United Methodist pastor near Fort Leonard Wood, Missouri. He serves on the Boards of Directors for the ARP, Roxy Theater and MCDP. Though retired, he is a regular speaker at the Unitarian Universalist Fellowship. His five grandchildren, ages two to thirteen years, live in Evansville, Indiana. He is a veteran of the Vietnam War and served in Germany and Korea while on active duty.
RELATED ARTICLES
Spirituality