Clarksville wants to install red-light cameras at up to four Clarksville intersections in what is basically a dangerous revenue generating scheme. These cameras result in more accidents not less. The damage rear end accidents cause costs more to repair. There is also an increased likelihood of injuries and even death to those who are involved in the rear-end accidents. Let’s not even talk about the fact that insurance rates will likely end up going through the roof even if you never get one of these tickets.

Lets take a look at other risks these cameras subject you to. Remember, under these “civil violations” the city’s standard of evidence is much lower that in a criminal case, and you are basically presumed guilty, unless you can prove yourself innocent.

In other words, the city had to prove that Brown owned the Chevy, and that the Chevy was photographed on September 18, 2006. It did not have to prove Brown did anything wrong — mere ownership of the vehicle constituted the civil crime. Moreover, the court found this arrangement did not violate the constitutional protections against self-incrimination because Brown did not need to admit guilt — he was automatically guilty. “Again, this misses the point,” Judge Swiney wrote. “City Code Section 17-210 does not make the driver of the vehicle liable. Rather, it is the owner of the vehicle who is responsible for a red light violation, regardless of who actually was driving.” – Tennessee Appeals Court Embraces Red Light Cameras 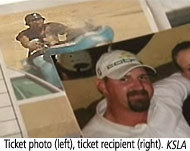 Recent incidents in Georgia and Louisiana call into question the common assertion of photo enforcement advocates that the camera never lies. Officials in charge of red light camera and speed camera programs claim it is “rare” for erroneous tickets to be issued because a human police officers diligently verifies each and every citation for accuracy before it is issued.

It appears that Lafayette, Louisiana, made no such check when, as KSLA television reported, it mailed a black man’s red light camera ticket to a white man. The city accused Alan Dukes, the owner of a 2005 Honda motorcycle, of speeding on June 4. Yet the photograph of the alleged violation clearly shows a black man riding a Harley Davidson motorcycle. Dukes maintains that he is innocent. “You can see there’s no close resemblance, whatsoever,” Alicia Dukes told KSLA in comparing a photo of her husband to the ticket photo. Lafayette’s director of photo ticketing, Tony Tramel, insisted it would cost too much money to have police officers witness violations and ticket drivers in person. “Do we make errors or mistakes? Occasionally it does happen,” Tramel admitted. “Can we be absolutely perfect? I wish we could.” Lafayette’s error is the inverse of a 2006 situation in Scottsdale, Arizona where a black man was sent a white man’s speeding ticket.

In Atlanta, Georgia it was the owner of a white car that was sent a ticket for an offense committed by a black car. WPLG television reported on this case where great grandmother and Hollywood, Florida resident Evelyn Singer received a ticket for running a red light in Atlanta at 6:30am on June 24 at the intersection of Courtland and Baker streets. The document insisted that Singer pay $70. Singer responded with a certified letter explaining that her white Acura looked nothing like the black Pontiac committing the offense alleged in the ticket photograph. Moreover, she has not been to Atlanta in thirty-five years. When Singer later called to confirm whether the ticket had been canceled or not, the courthouse either put her on hold or hung up while the Miami television station’s cameras were rolling. After several frustrating attempts, Singer reached a a human and asked how often the cameras make mistakes. “It doesn’t really matter as far as what we’re trying to accomplish,” the unidentified Georgia courthouse official responded. The court told WPLG that it was likely Singer’s ticket would be canceled.

Tell our City council and Mayor that we want them to stop! planning on bringing this dangerous revenue generating scheme to our town! Just say no! to traffic enforcement cameras on our streets!