This is part one of a two part story on Adventure Skydiving as it happens on weekends at Outlaw Air Field. Part two ran on Wednesday, October 14. Bill Larson wrote:

I have always wanted to jump out of an airplane. It was an item on my bucket list. You know, a list of things to do before you kick the proverbial bucket. So when a chance came to cross one of those items off my list by jumping out of an airplane, and then write about it, I, please pardon the pun, jumped at the opportunity…

After covering a story, Clarksville Online Editor Christine Piesyk and I decided to take a country drive. I had ulterior motives of checking on the gas prices in Kentucky. At the time, gas prices in Clarksville had topped the $4 mark and prices in Oak Grove were rumored to be much lower. So I set out to see just how much. We got to a station in Oak Grove off of I-24 and paid 32 cents per gallon less than we would have paid at the cheapest station in Clarksville. Happy with my purchase I started driving home.

A mile or two down the road, we were approaching Outlaw Field when bubbles of color exploded in the air above us! Skydivers were descending towards the airport. Smelling the possibility of a story, Christine and I decided to stop and see what was going on. 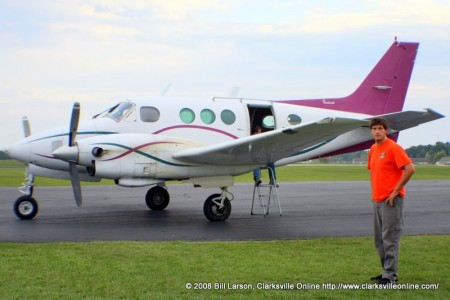 It seems that in the last year Adventure Skydiving had setup shop at the airfield, rapidly becoming one of the largest businesses utilizing Outlaw Field. They offer skydiving to both experienced solo jumpers and to novices like myself who have never jumped but have always wanted to.

Adventure Skydiving basically partners you up with an experienced jumper in what’s known as a tandem jump. You are hooked tightly to the front of the more experienced skydiver, who then controls the equipment while you get to concentrate on the experience of your first jump. They offered me a free jump so that I could do this story, but at the time I deferred, as I had not had the time to psychologically prep myself for it. Instead I asked if I could go up with them and take photos of the skydivers leaving the aircraft. They agreed and I was soon donning a parachute and being given quick instructions on how to use it, just in case there was a problem. 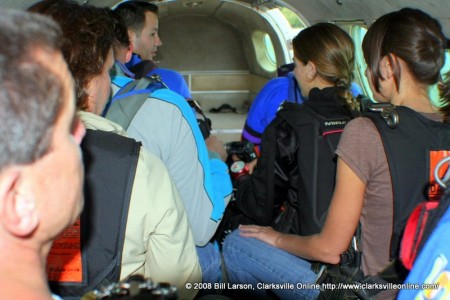 We then got in the airplane. I was placed at the front of the plane with the pilot and cautioned not to accidentally hit the engine controls. I was that close. The skydivers then boarded the plane. First the tandem jumpers experienced partners, then the novices. Last to board the aircraft were the solo jumpers.

They lowered a clear plastic cover over the door, started the engine, and we were off. I love to fly. I could fly every single day of my life and never get tired of the experience. I have also always wanted to learn to fly an airplane, but lets save that for a future story.

Needless to say I was already enjoying myself. 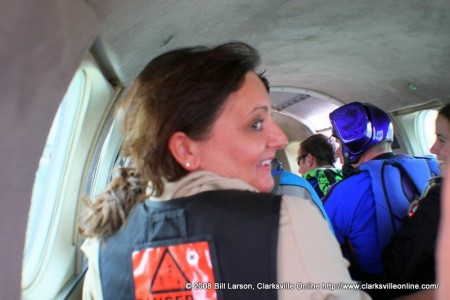 As the plane lifted off the experienced skydivers took the time to check their equipment; their charges — first time jumpers, a mother and daughter — shared nervous looks back and forth between each other.

We reached an altitude of 14,000 feet before the pilot signaled to the jumpers to open the door. Due to the noise inside the aircraft, the skydivers relayed cries of “DOOR!” towards the back of the airplane until the guy by the door heard it and raised it up. The pilot then told me not to close the door after the jumpers left as it had to remain open until the plane reached the ground. He probably didn’t want me to fall out.

A few minutes later the pilot shouted out, “GO!” “GO!” “GO!” and the jumpers unbuckled and started moving towards the back of the plane. The solo jumpers moved quickly to the back of the plane and leaped out the door almost without hesitation. They were followed by the skydiving videographers and photographers who will give you memorable keepsakes of your jump for a nominal fee. They clung to the door as the teams of tandem jumpers got their charges positioned at the exit. The professional skydivers gave thumbs up for my camera then launched themselves and their charges out the door.

After the last skydiver has left the plane the pilot made a beeline for the runway and the ground. It’s the steepest descent I have ever had the pleasure of experiencing — total fun!

We landed and moments later I was out the door and on my way over to where the mother and daughter jumpers had landed. Their faces were alight with exhilaration. They relayed the story of their jump to their family members who stayed on the ground. 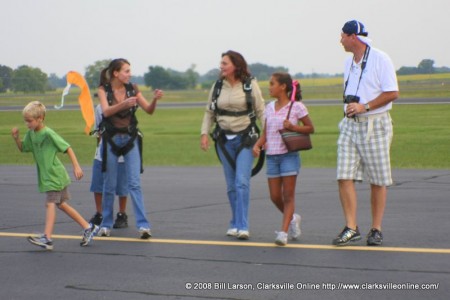 You can go to the airfield and watch the jumpers on Saturdays and Sundays. There are some seats just outside the terminal roughly 150 feet from where the jumpers land. So you get a great show.