HomeArts/LeisureThe Royal Opera's 'Carmen' ~ one night only at the Carmike...
Arts/LeisureEventsNews 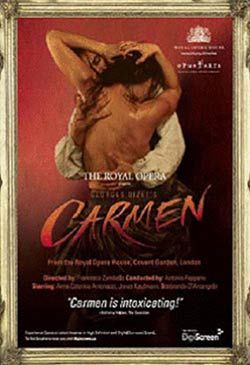 The Spanish heat and gypsy passion of Georges Bizet’s Carmen comes to life in Francesca Zambello’s Covent Garden production of this classic opera, now playing on screens around the world, including the Carmike 10 at Governor’s Square Mall on Thursday, October 16, at 7 p.m.Tickets are $15.00 and can be ordered online.

Zambello recreates the sun-drenched and sensual world of 19th century Spain, with its ranks of soldiers and crowds of peasants, its gypsies and bullfighters, its spectacle and its deadly, white-hot emotions.

The story is set in Seville, Spain, circa 1830, and concerns the passionate and volatile Carmen, a beautiful Gypsy with a fiery temper. Free with her love, she woos the corporal Don José, an inexperienced soldier. Their relationship leads to his rejection of his former love, mutiny against his superior, and joining a gang of smugglers. His jealousy when she turns from him to the bullfighter Escamillo leads him to murder Carmen.

At the heart of this story of one woman’s tangled relationship with two men is Carmen herself, played by the fabulous singer-actor Anna Caterina Antonacci. The great Italian soprano is matched by two devilishly handsome men as her love interest; steamingly sexy German tenor, Jonas Kaufmann and the smoldering Italian baritone Ildebrando D’Arcangelo.

Bizet based his opera on based on the novella of the same title by Prosper Mérimée, first published in 1845, which itself was influenced by the narrative poem ‘The Gypsies’ (1824) by Pushkin.

The opera premiered at the Opéra Comique of Paris in 1875, but the opening run was a failure, the work being denounced by the majority of critics. Shortly after the composer’s death only three months later, the production in Vienna (October 1875) began this opera’s path to worldwide popularity.

Bizet worked elements of Spanish music into the score; keeping the music obviously French. Several pieces, especially the Seguidilla and the Gypsy Song make use of the elements of flamenco music. Bizet worked several popular Spanish songs directly into the score. These include El arreglito which became the habanera, and the folk-song Carmen impudently sings when interrogated by Zuniga. The habanera was written to replace an aria that Galli-Marié disliked, and Bizet supposedly wrote over ten revisions.

Since the 1880s it has been one of the world’s most performed operas and a staple of the operatic repertoire. Carmen appears as number four on Opera America’s list of the 20 most-performed operas in North America.For more information, call the Carmike at (931) 503-0783