It’s been a challenging effort, but PGM Properties has officially broken ground on what will soon come to be known as Madison Commons, the new home of the Publix Supermarket chain in Clarksville, TN. The Publix brand has been on the lips of area residents long before the news was officially released that the chain was looking at the City of Clarksville for a possible home, and the residents are more than ready to welcome them into our community.

In a ceremony kicked off by Clarksville’s Mayor Johnny Piper at the old Memorial Hospital location city and county leaders went out of their way to ensure that the Brentwood based PGM properties knows they are indeed welcome. They will be the primary developer for the site. “PGM properties specializes in Publix grocery store developments.” according to Dudley Parker, the chief project developer.

The development is going to be quite significant. The total area is approximately 73,000 square feet, with the Publix store occupying 54,000. PGM properties plans call for the Publix store to be open sometime between late 2011 and early 2012. Morgan, Inc has been contracted for the demolition of the old Memorial Hospital facility. Legends Bank is the leading financial partner is putting the funding for the project together.

Below is an artist rendition of the planned development from the City’s Smart Growth 2030 Master Plan. 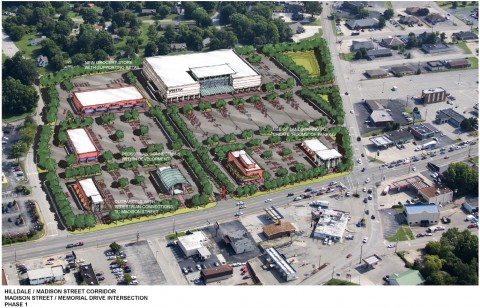 City Planners hope that the presence of the Supermarket in the area will spur growth similar to how the construction of the Great Escape Movie theater triggered explosive growth in the Exit 1 area of North Clarksville. Indeed they have another slide that shows how they hope the area will continue to develop over the next 3-10 years. 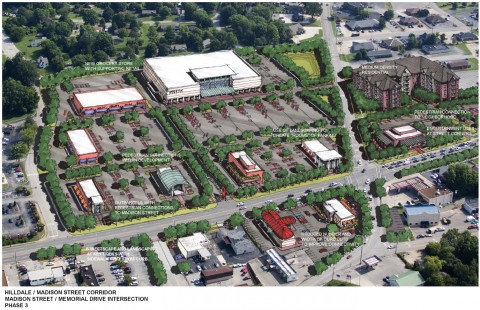 Mayor Johnny Piper stated in his opening statement “This has been an interesting journey to get us here today. This is the beginning of a new chapter, a new era for Clarksville-Montgomery County.” It was a project that could not have happened without cooperation between city and county leaders. “This is a great example of what can happen when Government, city & county can work together.” he said.

Montgomery County Mayor Carolyn Bowers Thanked the Montgomery County Board of Commissioners for “Stepping up as they did back when the Hemlock Semiconductor Corporation planning on coming here.” she said they considered the interest of the city and county residents when the county assumed 70% of the economic impact plan. She thanked the Clarksville City county for assuming the remaining 30%. “That’s being given in order to see our community make progress. Now is the time and the place for Clarksville and Montgomery County to move forward and progress into a regional community, drawing people here to shop from all over the region.”

PGM Properties has been looking at the Clarksville area for over 5 years. During that time they have expended a lot of effort to persuade the Publix chain that Clarksville will be right for them. Indeed Dudley Parker described it as “My trek, my journey”. In the end, Publix was sold on the idea and we gathered together to see that dream take a concrete form with the official ground breaking. Parker thinks that in the end it was all worth the effort “The Journey was well worth taking. I think everyone in our company could say this has been a wonderful, wonderful, hard earned opportunity. We are so proud to become a part of this community.

Well Mr Parker, let this writer assure you that Clarksville is just as proud to have you and Publix here!