The Planters Bank Cube has finally been caught! 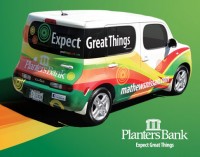 Clarksville, TN – Planters Bank gave away the Nissan Cube yesterday. The Catch the Cube giveaway was sponsored by Garland Nissan and Matthews Nissan. Owner and President O.B. Garland along with other dealership employees  were on hand to watch the giveaway.

They were selected at events such as Rivers & Spires,  Clarksville’s Downtown Market, and Hopkinsville’s Salute to  Fort Campbell Week. Other finalists were drawn from online entries and new account openings at the bank’s eight branches. Finally, two were randomly drawn from all entries last week by a representative of Matthews Nissan.

“This has been a very fun and different type of initiative for us,” says Planters CEO Elizabeth McCoy. “Some of our  finalists are simply ecstatic about the possibility of  winning this car, which has been so nice to see.”

Joe Pitts, Planter’s Bank’s Vice President of Business Development began by thanking the O.B Garland and his dealership for their assistance in providing the vehicle. He also thanked the Leaf Chronicle and Clarksville Online for their help in promoting the event. Then he introduced each of the finalists, who got a moment to say why they should win the car.

First up was  Wanda Morrison who registered at the Rivers and Spires festival, who said “I am excited to get the  opportunity to win this vehicle, and I hope I get to drive home in it.”

Next was Rise Herndon from Hopkinsville, KY.

David Fain was unable to attend the drawing and so was represented by his wife Michelle.

Then Pitts introduced Rene Hampton who registered at the City of Clarksville’s Downtown Market.

She was followed by Candy Peters who said, “I participated in the drawing at the Chili Cook Off at the Support the Eagles Week, and I am excited about how they decorated my car,” as the crowd laughed Pitts quipped “It pays to support your troops.”

Next up was Penny Goddard was was entered in a drawing as one of the new Planters Bank account holders. She said “We hope to be the ones to drive the car off today.”

Eric Huneycutt got up and said “I am going to win this car for my wife.”

Michael Barbee from Herndon Kentucky attended with his grandchildren Shelby and Caleb. “I think they are more excited about winning this thing than Anybody else since we started this adventure. So I think that Shelby and Caleb will be ready to drive it off in just a few years, but I will take care of it for them.”

Next up was Brittany Croft a student at Austin Peay State University from McEwen, TN.

She was followed by Darryl Cunningham from Hopkinsville.

Melody Shipley an Administrative Assistant at Austin Peay State University was up next. Melody is also a Ceramic Artist.

Last but not least was Pat Martin who said, “I am going home with that Cube”

One by one each finalist entered the car and attempted to start the vehicle, and each failed until Eric Huneycutt (Age  23) sat down in the car, and his key successfully started  the vehicle. “Yes! Yes!” he exclaimed as he pumped his fist in the air in victory.

Eric plans to give the cube to his wife Amanda who is currently expecting their  first child in around a month.

“I couldn’t feel any better, I was so happy I could barely sit in the seat.” Eric said when asked how he feels about his win. He continued, “It’s a pretty nice car.”

According to Planters Bank Huneycutt had maintained a positive attitude through out by exclaiming “I know I am going to win that car” every time he visited the bank.

Planters Bank is committed to delivering an exceptional banking experience by blending technological convenience with helpful customer service and personalized attention.   We understand the importance of strong, hometown values and the impact of local decision making in the communities we serve. Not everyone expects a community bank to lead the way, but Planters accepts the challenge and is dedicated to exceeding your expectations.

Since first opening its doors, Planters Bank has made a name for itself as an energetic player in the financial services market. Contributing to our success is the ability to leverage the flexibility associated with being locally owned and operated with a strong focus on service.

Today, Planters Bank has eight full-service locations serving Hopkinsville, Kentucky (Christian County) as well as Clarksville, Tennessee (Montgomery County). The bank’s Main Street office in Hopkinsville is in the Dillard-Campbell House, which was built in 1849 and listed in the National Register of Historic Places.