Clarksville, TN – On Friday, March 18th, 2011, the Kenwood Middle School Varsity Baseball lost their 2nd game of the season to the Rossview Hawks dropping their record to 2-2.

Ivan Purcell takes the loss with Joe Allen coming on in relief in the 4th inning making his Kenwood pitching debut. The Knights struggled at the plate for the first 3 inning of the game going hitless. The Kenwood outfield committed 7 errors during the game giving the Hawks plenty of extra outs. Truman Brown pitched three shutout inning for the Hawks. 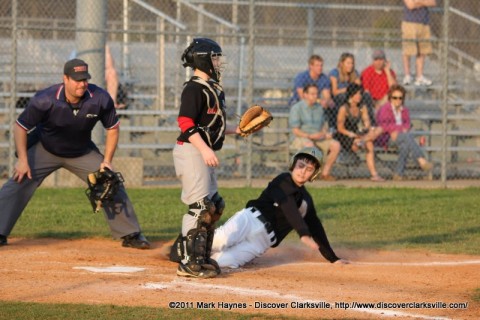 Kenwood never gave up and played hard the entire game. With the score 0-11 after four complete innings and a Hawks pitching change, the Knights rallied back to score one run in the 4th and two runs in the 5th. The highlight of the game for the Knights was a smashing triple in the 5th inning by Joe Allen. Dillon Johnson and Blake Keily had 2 hits each for the Hawks. The final score was 3-11 in favor of the Rossview Hawks.

In the Junior Varsity game the Knights improved their record to 3-1 by beating Rossview Hawks 6-2. Michael Merriweather, Alex Brack and KJ Williams combine to pitch an excellent game. Dalton Leavell, Joe Allen and Devonte Maffet had two hits each.  DeAndre Allen, Alex Brack and Logan Lee also had base hits.

The Kenwood Knight next game is against the Richview Cowboys at home on Monday, March 21st, 2011.