Evansville, IN – Austin Peay State University’s baseball team will make one non-conference trip this week, traveling to Evansville for a 6:00pm, Wednesday contest at Braun Stadium.

Austin Peay (25-19) brings a seven-game winning streak – and has won 10 of its last 12 contests – into the midweek affair after posting three-game sweeps in its last two weekends against Ohio Valley Conference members Tennessee Tech and Morehead State. The Govs last loss was a 1-0, rain-shortened affair at SIU Edwardsville, April 22nd.

The Govs will travel seeking revenge for a 24-3 loss handed to them by the Purple Aces, April 5th, in Clarksville. Evansville used a 13-run third inning to break the game open as Austin Peay used seven pitchers in an attempt to stem the tide.

Sophomore shortstop Reed Harper, the reigning adidas OVC Player of the Week, will put his 22-game hit streak on the line in Wednesday’s contest. He is batting .459 (39-of-85) with 24 RBI during the streak which began April 2nd. 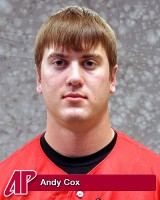 Austin Peay will turn to junior right-hander Andy Cox (0-2, 9.35 ERA) who will be making his season’s fourth start – all in midweek outings. He has not made a start since an April 19th outing against Lipscomb in which he allowed seven runs over five innings. Cox has since made relief appearances at Morehead State and against Tennessee Tech, allowing one run in 3.2 combined innings.

Evansville (26-17) has won six of its last eight, the two losses coming in a 2-1 Missouri Valley Conference series loss at Indiana State, last weekend. The Purple Aces are 5-1 against OVC teams this season with wins against UT Martin, Eastern Illinois, Austin Peay and Murray State.