Clarksville, TN – On October 6th, 2011 around 9:40pm, witnesses called 911 after hearing glass break and seeing a male and female breaking into Bolin’s Rental at 1618 Fort Campbell Boulevard and loading a 60 inch TV into the back of a car. But, the witnesses actions did not stop with the call to 911.

The group confronted the thieves in an effort to detain them. The burglars fled from the scene and the TV was destroyed as they sped off. Several of the witnesses followed the vehicle for approximately three miles, at which time, officers took the two into custody. 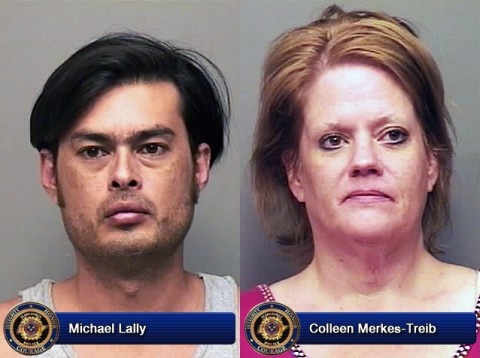 Detective Ronald Parrish took over the investigation and linked the couple to three additional smash and grab burglaries. He determined the couple had used similar methodology for breaking into all of the businesses. They would use a rock or other object to break the glass, grab a TV, and flee from the scene.

During the course of his interview with the suspects, he found they had committed four burglaries of businesses between September 24th and October 6th, taking property valued at over $5500.

Michael Francis Lally was already on probation for Theft and has a history of Theft and Probation Violations.