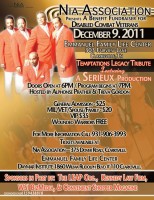 Clarksville, TN – Many people think that the war stops for soldiers when they return home from the battlefield, but for combat wounded warriors, the end of the battle is just beginning of their fight. First they fight for their recovery. Then they have to fight each day of their rehabilitation in order to have as normal of a life as possible, and Carol Clardy Stevens and NIA Association wants to help them with that.

Like most things in life, this requires funding to be able to do, so they will be holding fundraiser on December 9th, featuring the Temptations tribute band Serieux the Legacy Continues, at the Emmanuel Family Life Center. The doors open at 6:00pm, with the program begins at 7:00pm.

Fantastic, Awesome, and Dynamic – These are the words used by audiences all over the world to describe the explosive entertainment provided by the group Serieux, a high impact, group of singers and musicians, who has re-surfaced the “back in the day” Motown sound that once captivated the entire world. Serieux brings its own unique style and charisma with a dash of that Motown flavor.

The group was founded in 1998 by vocalist Larry Griffin, who also serves as the groups choreographer and manager; Valenica Taylor and Donovan Johnson. The 10 member group perfected that 60’s and 70’s “Motown Sound” made famous by world renowned groups like the Temptations, The Contours, The Miracles, The Four Tops and many others.

They’ve performed as the opening acts for Earth, Wind and Fire, The Four Tops, The Neville Brothers, K.C. and the Sunshine Band, The Manhattans, and The Whisper, O’Jays. They tour with Ali Woodson former lead singer of “The Temptations” as his Temptations Review Tribute Group. They’ve also performed in a Motown Musical “Come and get these Memories” with Martha Reeves and won acclaim as “The Temptations” in “Marvin, My Brother – The Marvin Gaye Story”.

Their talent has taken this group all over the United States, and around the world. Serieux has provided the entertainment at events such as the Motown Tribute to The Four Tops; The premier showing of the Tom Hanks movie The Polar Express for Hospice of American; The Detroit International Auto Show; The Regan Center in Washington DC; The Delta Sigma Theta Sorority Regional Conference; The Oscar after party in California with Ollie Woodson. (Former Lead singer for The Temptations); and The Cann Film Festival in Nice France.

In June 2007, Serieux launched their first CD entitled “I Can Give You Love,” featuring R&B legend, George Curtis “GC” Cameron former lead singer of The Spinners and The Temptations. Their new CD has gained recognition and excited the ears of fans throughout the United States, Europe, and Japan. The CD will tantalize the music lover in you with songs such as: “Keep Running Back, My Hearts on Fire, I Can Give You Love, Du The Damn Thang, and Sarah Smile.”

First Missionary Baptist Church is hosting the evening with Treva Gordon and Alphonse Prather emceeing. The event will also showcase local talent including performances by the Daughters of Hull, testimonials from wounded warriors, along with an evening of food and fun.

NIA Founder Carol Clardy Stevens is herself a widow of a disabled combat veteran from the Vietnam Era, and she continues to wear his wings proudly. “We see a lot of issues going on with our present day wounded warriors, along with veterans from decades past.”

She feels that the the Spirit of the Lord moved her heart to look to increase the support provided for combat disabled veterans in our area. “The purpose of this Fundraiser is to assist us with providing much needed support to Disabled Veterans and their Caregivers including Personal Assistance, Housing, Employment, Financial, Medical, Logistical, Transportation and Home Modification coordination. NIA Association has provided these supports to other people with disabilities for over 13 years in our community.”

“The Soldiers and their families need extra support,” said Executive Director Cheryl Durham. “One of the reasons we are looking towards doing this is because Fort Campbell and the VA can’t do it all by themselves, the community should step up as well.”

“Veterans disability care is something new for us, we want to raise awareness in the community, and to raise funds.” said NIA Association Chief Operations Officer Derrick Stevens. “A few of our affiliates have been talking to us about expanding our capacity. We wanted it to be offering more affordable housing or caregiver support for Combat Disabled Veterans,” he said. “Some of the wounded warriors who have major physical disabilities which limit their ability to work.”

“Heightening the awareness of these issues in the community is our primary goal, raising money is secondary.” said Stevens. “I went out to visit a disabled combat veteran and that helped me see how much that man sacrificed from the community, unless you do something like that it’s hard to understand how much their injuries affects their lives. It’s about the heart of the NIA Association.”

The evening is sponsored by the L.E.A.P. Organization, The Kennedy Law Firm, WSI BizMedia, and the Convenient Shopper Magazine.

For more information contact NIA Association at 931-906-3993, organizations interested in becoming a sponsor should call 931-980-466. You can find out more about the NIA Association on their web site at http://www.niaassociation.org/.