HomeNewsClarksville Police charge Man with Aggravated Child Abuse and Neglect after One...
News

Clarksville, TN – On March 18th, around 9:15am, a 26 old woman arrived home on Darlene Drive and found a one year old child standing alone in the street. The child had no shoes on, wearing only a t-shirt, and a soiled diaper. The child was covered in mud and wet.

A man who saw the woman approach the child exited his vehicle and said the child had been outside for about 10 minutes but thought that someone was watching the child. 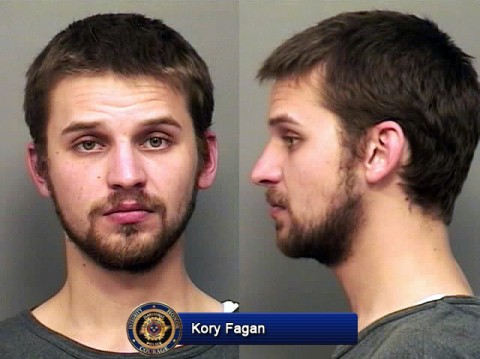 The woman took the child to two different apartments, but was unsuccessful locating a parent or guardian.

She took the child inside and attempted to clean the child up and went back outside and resumed her attempts to locate the child’s residence. Several people outside pointed to 145 Darlene Drive, Apt C., which was an upstairs apartment, and said the child belonged there.

The woman went upstairs to Apt C where the door was open, saw Kory Fagan laying on the couch asleep, and had to yell loudly to get him to wake up. Fagan, the child’s father was hostile toward the woman, took the child, and went back inside.

Clarksville Police Officers were called to the scene around 9:40am and had contact with Fagan, who said he had been folding laundry and did not believe the child knew how to go down the steps. Montgomery County Emergency Medical Services was also notified to respond to the scene.

When EMS arrived, the child was still dirty, wearing a soiled diaper, and had red marks on her back. EMS took the child to the emergency room for evaluation and the Department of Children’s Services was notified.

The child’s mother was not at home when this occurred.

After Detective Misty Darland interviewed witnesses and completed her investigation Kory Fagan was taken into custody.