HomeSportsAustin Peay Lady Govs Golf in 13th after Day One of Saluki...
Sports

Carbondale, IL – Austin Peay State University women’s golf team struggled with its first spring tourney round, Sunday, shooting a 330 to sit in 13th place after Day One of the Saluki Invitational, being played at the Hickory Ridge Golf Course.

The Lady Govs team failed to see one player break 80. Junior Holly Batey led the Lady Govs with an 80, tying her for 26th place overall. Redshirt sophomore Tabitha Beard was one shot back while sophomore Rachel Deaton came in at 84 and senior Ashley Averitt at 85. Freshman Meghan Mueller shot an 87.

“It was a long, wet course, APSU coach Sara Robson said. “We hit a lot of great shots, but we need to eliminate mental mistakes. 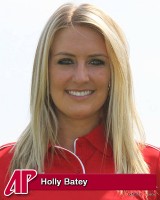 “Holly played well today and was very close to a great round. Tabitha scrambled to get the ball in hole. Rachel is still fighting injury and had trouble with pain over the last five holes.”

Freshman Marta Gutierrez, playing as an individual, had the Lady Govs’ best score with a 79, tying her for 16th. However, a possible terrific round was grounded when an allergic reaction forced her go si over on the final seven holes.

Host Southern Illinois leads the tourney after firing a first-round 301. SIU Edwardsville, a Lady Govs foe now, fired a 317 to sit in fourth place while Eastern Kentucky is ninth at 321. Eastern Illinois is in 14th place after shooting a 331.