Forward Operating Base Fenty, Afghanistan – When it comes to joining the military, the decision can be easier for some than it is for others.

For U.S. Army Staff Sgt. Christopher Dollar, a native to Yakima, WA, the decision wasn’t too hard at all.

“I joined the Army because I wanted to get out of the town that I was in, and, you know, I was trying to look at something for a career to kind of help me advance my education,” Dollar said.

A single soldier, Dollar stated that most of his family is back home in Yakima, with his dad and sister living in Modesto, CA.

“I just love what I do, the camaraderie, and taking care of soldiers. I got in, and got myself into a role and a position that I like and I’ve just been sticking with it ever since.” 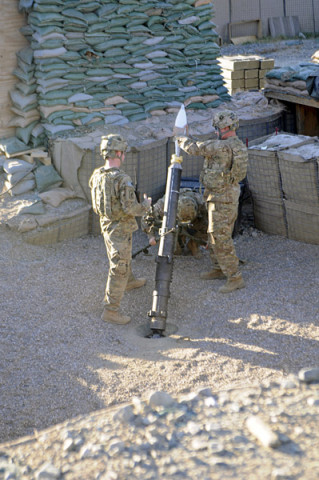 Dollar attended basic training at Fort Sill, OK, and since then has been stationed at 2nd Bn., 82nd FAR, 3rd BCT, 1st Cavalry Division at Fort Hood, Texas, and as a recruiter for Seattle Battalion, 6th Brigade U.S. Army Recruiting Command, before arriving to his current battalion in December 2011.

Dollar also mentioned that although he was selected to be a recruiter, he still enjoyed his job and bringing soldiers into the Army.

“A lot of them, I definitely targeted probably the younger kids, but I wanted to show them there’s a way to get a better education and just not do the same things in the same town that you were doing, and show them that it was a good way,” he said. “I made a good decision and I just wanted to pass it on.”

Even though he is no longer a recruiter, Dollar says he still uses the tools he learned as a recruiter to convince Soldiers to stay in the Army.

“I like this battalion, it’s a nice battalion, I have fun with it,” he said. “I would have no problem staying with the battalion, but at the same time I don’t mind moving either. I don’t mind traveling and getting some more knowledge and just, you know, meeting new faces and going out there and seeing new places.”