“The ANSF were coming in to clear through the known historical insurgent fighting positions and cache locations,” said U.S. Army Capt. Justin Liesen, the command of Company A, 1st Bn., 327th Inf. Regt., and native to Quincy, IL. “The ALP were establishing a checkpoint for permanent security and coalition forces were helping to provide outer security while the police and border police cleared through.”

The operation began in the early morning hours of March 27th, with the battalion and several ANA soldiers air assaulting into the district with CH-47 Chinook helicopters from Combat Outpost Connolly, Afghanistan, under cover of darkness. The combined forces then conducted a foot march of more than 1,500 meters to reach the villages within the valley.

After arriving to the area, the battalion divided themselves into three separate areas in the valley: Archangel Security Forces Assistance and Advisory Team remained on top of a hill overlooking the valley at an ANSF compound, Bravo Company Bushmasters occupied a village on the northern side of a riverbed and Alpha Company Abu occupied the southern side. 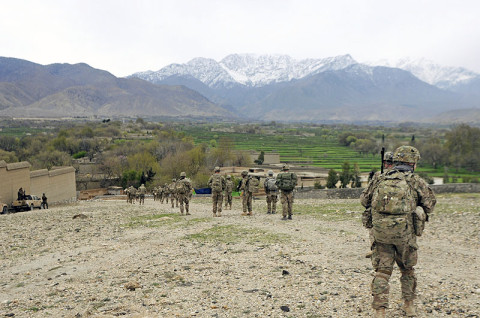 “We were supplementing ANA security positions to help provide the outer security for the police and provide air assets, advisements, assistance and indirect assets,” said Liesen.

The Abu Soldiers spent their days and nights conducting patrols through the local village and farms, interacting with the locals and providing security while ANSF conducted their operations, according to Liesen.

“Basically providing a larger security area than what the ANA could provide from their position and also gaining atmospherics from the people and what their thoughts were on how the ANSF are doing, which we found that over here, they were very happy with the conduct of the ANSF and the way the ANSF treated them,” said Liesen.

Assisting the ground troops with their operations was air support from AH-64 Apache helicopters, A-10 Warthogs, B-1 Bombers and unmanned aerial vehicles, all providing overwatch and security as well as show of force to help diminish possible attacks against both Afghan and U.S. forces. 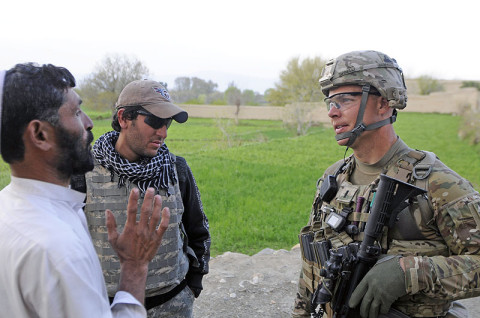 During the fifth day there, the district governor held a Shura meeting with all of the village Maliks and the ANSF leaders operating in the area.

“The intent of the Shura was to get the local Maliks to help provide support to the ALP and ANSF, more specifically the ALP was the underlined intent,” said Liesen.

Liesen added that, “It was a joint ANA, AUP, ABP, ALP and governance Shura where they showed a united front in front of the Maliks saying ‘We are here to help provide security and help increase the security for you. We need support from you to maintain that security.’ ”

On the night of the fifth day, the Soldiers packed all their gear and began heading out to their designated helicopter landing zone outside the valley.

While leaving, the Abu Soldiers received small arms fire from the distance; however, no one was injured and soon after they were able to safely maneuver to their HLZ, or helo landing zone.

Once there, the Soldiers provided security until the Chinooks arrived to return them to FOB Connolly.

“I think it was very successful,” said Liesen. “I think the key points we heard from some of the atmospherics we got was that the ANSF are respectful to the people, the people appreciated their presence and, in fact, asked for more presence from the ANSF.”

Liesen mentioned that an interesting fact mentioned during the Shura was leaders and civilians from Jalalabad have recently began to travel to the Khogyani area to be near the mountains and have picnics with their families, which is a basic increase in tourism for the district.

“The atmospherics collection was very successful and the local people walked away from the Shura with a good taste of the professionalism of the ANA, AUP and ALP and I think that will help to build that relationship,” said Liesen.