Clarksville, TN – Austin Peay State University’s softball team scored three times in the bottom of the sixth inning, to break a 1-1 deadlock with Southeast Missouri and come away with a sweep of their Ohio Valley Conference series, winning the finale 4-1.

Laurel Burroughs would start the inning off for the Lady Govs (18-24, 9-15 OVC) with a single up the middle and move into scoring position by stealing second base. Lauren de Castro then singled into right field scoring Burroughs, to make it 2-1, while advancing to second base on the throw home.

Burroughs and de Castro had two hits each to lead Austin Peay.

A wild pitch would get de Castro to third base, with Southeast Missouri (15-30, 6-16 OVC) getting the next hitter out. But they would load the bases with a walk to Shelby Norton and pinch hitter Morgan Brewer being hit by a pitch. That brought up Jessica Ryan, who flew out deep enough to left field to allow de Castro to score from third on the sacrifice fly to make it 3-1. 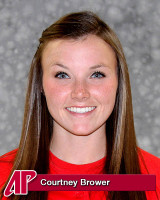 Courtney Brower would follow with an infield single, scoring pinch runner Misti Maki from second base to push the Lady Govs lead out to three runs, 4-1.

The Redhawks would threaten in the bottom of the seventh inning, loading the bases with one out on a double by Xia Wilson, a single by Lindsey Patterson and Simone Patterson being hit by a pitch. Wilson had two hits to lead Southeast Missouri.

But Chelsea Smith hit a groundball to Norton at third, who stepped on the bag and threw to first base for a game-ending double play.

Picking up the win was de Castro (9-11) who gave up one run on six hits, while walking five and striking out two. Overall, de Castro stranded 11 Redhawk runners on the bases.

The win also moved coach Stephanie Paris into second place all time in school history for victories by a coach in their first season at the helm.

Austin Peay jumped out to a 1-0 lead two batters into the game, with Burroughs blasting her seventh home run of the season over the left field fence off Redhawks starter Hannah Clemons (4-7), who took the loss.

The home run was the 30th of the season for Austin Peay overall, tying the school’s single-season record.

Southeast Missouri would tie the game 1-1 in the top of the second inning with Kaitlin Zink getting on with a one-out single to right field, get into scoring position by stealing second base, and score on a single up the middle by Leah Becker.

Austin Peay closes out its regular season at Murray State, May 4th and 5th.