Clarksville, TN – After a dynamic first week in a Governors uniform, freshman utility man Ridge Smith, of the Austin Peay State University baseball team, has been named this week’s Copies in a Flash APSU Athlete of the Week.

Smith hit .600 (6-for-10) in his first weekend series against Iowa, smacking four doubles, driving in seven runs and scoring six as the Govs went 1-2 against the visiting Hawkeyes. His .600/1.000/.643 slash-line (average/slugging/on-base percentage) leads the OVC in each category after the first weekend of play. 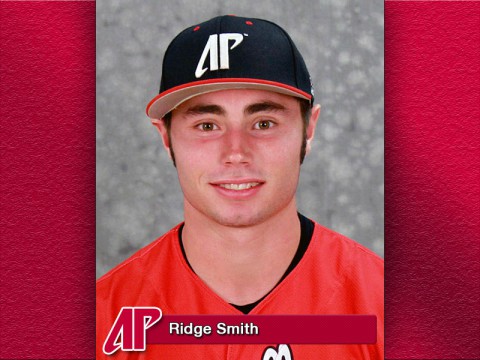 Smith started his career by going 2-for-3 in Saturday’s season-opener, with a two-run double acting as his first career hit. He was 3-for-5 with three driven in during Saturday’s nightcap and concluded the weekend by going 2-for-5 and driving in the go-ahead run in Sunday’s victory, the 800th of head coach Gary McClure’s career.