“They were hitting us hard out there – 12 vehicle and 2 house burglaries – so we were being vigilant,” said Investigator Geoffrey Blanchard. “I was out talking to a homeowner in the area around 10:00pm when I noticed a truck matching the description of a suspect vehicle.” 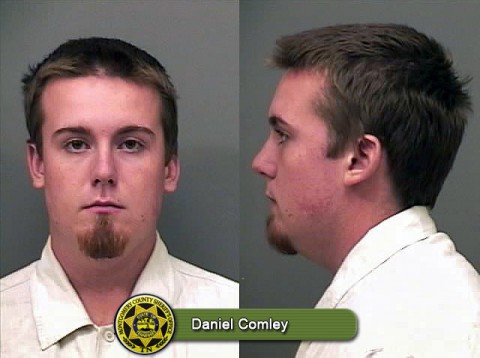 Blanchard pulled them over, and called in his backup, Deputy Dan Brinkmeyer.

Neither of the suspects could provide identification, and gave the investigator a questionable story about where they were going. He then noticed some of the reported stolen property in the truck along with burglary tools.

Upon investigating, one of the suspects, a juvenile, confessed to the crimes.

The only adult involved, Daniel Comley, 18, who gave a 4750 Lylewood Road, Woodlawn address, was arrested and charged with aggravated burglary, vehicle burglary and possession of burglary tools. His bond was set at $25,000.

“When I interviewed the juvenile, he implicated another juvenile,” Blanchard said. “We found him at his home in possession of a firearm and a compound bow.”

Through investigation of several addresses, Blanchard and Brinkmeyer were able to track down some of the stolen items including numerous electronics, wallets and other items, and return some of them to their owners. Investigators are still searching for more stolen property.

Investigators also found several items from incidents inside the Clarksville city limits, and are working with detectives at Clarksville Police Department in those cases.