HomeCommentaryWhen You Rescue an Animal from a Shelter
Commentary

When You Rescue an Animal from a Shelter 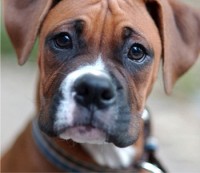 Clarksville, TN – One afternoon my husband Bill and I went to the Animal Shelter. One little puppy captured our hearts and we took her home with us.

Fawn, named because she is the color of a deer, has big brown eyes, huge paws, and the sculptured body of a boxer. The animal control officer, believed she would eventually weigh about 55 pounds. She now weighs 96 pounds (our fault, we are assured by her vet), and she is, unfortunately, somewhat obsessive-compulsive.

Fawn believes that order should reign in this world. When any object in our house is moved to a new location, Fawn is disturbed. When she was a puppy, she would stand and bark at the object until she finally decided that we weren’t going to move it again. She now just avoids that area for several weeks at a time.

Fawn does not believe that life’s activities are flexible. She has a routine and you are supposed to adhere to it. The minute I return from school in the afternoon, Fawn is to receive treats—numerous ones if she can convince me that starvation is imminent. She does not expect this service from Bill.

Her bedtime ritual is to follow a trail of cheese bits through the hall and into our bedroom. As soon as I’ve settled into bed, she lies down either on the floor beside me (if I am in favor) or on the floor next to Bill (if he is king for the night). If one of us has irked her for any reason, we are assured that we are now being isolated for good reason.

Her love life (in spite of having been spayed immediately after she was released to us from the animal shelter) is one of the most hilarious love stories of dogdom. Scruffy, the six-pound Yorkie who lives a couple of doors away, fell in love with Fawn one afternoon when she escaped from our backyard. Until Scruffy was neutered, he visited Fawn for many hours each day. She discouraged his advances by nipping him on the head. He would squeal like a soprano, but continue his attempts at love-making. Now Scruffy has been neutered; he still visits Fawn and they play well together almost daily. They are definitely The Odd Couple!

Fawn’s first eighteen months were punctuated by her favorite habit—chewing. Fawn chewed up half the plastic flower pots in our backyard, more paper items than we care to remember (including several of Bill’s books), and every soft toy she ever owned. We have resorted to giving her toys made only of hard rubber to avoid finding the entrails of cloth toys scattered about the yard. She has destroyed entire tarps, outdoor cushions, and any object left within her reach but, mercifully, not shoes, purses, or furniture. (We know of one case where a dog destroyed an entire couch so we feel fortunate!)

In her second year, she has reformed to some extent. She rarely destroys anything except paper towels, spinach or coffee grounds she finds in a trash can when she gets miffed at us. She makes sure that we are paying enough attention to her; otherwise, she resorts to some action guaranteed to cause shouting. Of course, her memory of bad behavior is only 1.3 to 1.7 seconds long so you’d better catch her quickly if you plan to correct the problem!

Just in case you think she isn’t the kind of animal who can tug at your heart, you’ll have to see her during meal time. She is quite fond of laying her head on Bill’s foot as he eats. If he doesn’t slip her a dog cookie often enough, she takes her foot and taps his toes. Certain that she is descended from a queen, Fawn prefers to eat most of her dinner treats lying down on her side with head sprawled backwards. You have to see it to believe it.

Fawn is my alarm clock when the electric one fails to wake me. She is accustomed to rising at 5:00am when I do on school days. If I don’t get up, she shakes my side of the bed with her paw. Unfortunately, she does not understand the concept of “weekends” so she wakes me early on Saturday and Sunday also.

We cannot imagine life without Fawn. All either of us has to do is look into her trusting eyes to know that we did the right thing in saving her from eventual euthanasia. Although she sometimes drives us to distraction, she also makes us laugh. Her unconditional love is priceless.

Sadly, in our hard economic times, many people have to give up their pets because they can’t support themselves, much less their dogs and cats. If you can find it in your heart to visit our local animal shelters and rescue one of these precious pets, you will be glad. They cannot save their own lives, but you can be their hero—and they can bring untold joy into your life.