Clarksville, TN – Sophomore infielder Garrett Copeland, of the Austin Peay State University baseball team, has been named the Copies in a Flash APSU Athlete of the Week.

Copeland hit .474 (9-for-19) last week, collecting three game-winning hits and his season’s first three home runs as the Govs went 3-1 with a midweek win against Middle Tennessee and a series victory at Raymond C. Hand Park against Belmont. 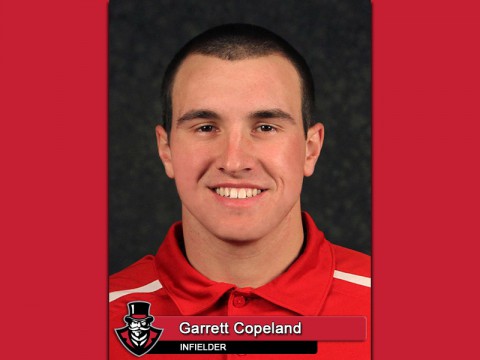 Copeland’s week started with a flourish, as he equaled Chad Cunningham’s 2008 APSU single-game hits record with six hits – including his season’s first home run – as the Govs rallied late to topple the Blue Raiders.

Each of Copeland’s hits during the weekend series against the Bruins proved timely. In the series opener, his two-run home run in the fifth inning provided Austin Peay’s winning run, while he contributed a two-run double in a Game Two loss on Saturday.

In the rubber match, the Bartlett native hit the game-winning home run to lead off the eighth inning and cap a six-run comeback win for Austin Peay.

Monday, Copeland was named adidas®/Ohio Valley Conference Baseball Player of the Week for his efforts. It’s his first career weekly honor from the conference office and second for an APSU player this season, after Patrick Massoni shared the March 10th award.