Marsellis, of Owasso, Oklahoma, was one of three setters named to the preseason poll.

She finished the year with 975 assists and her 8.06 assists per set was 10th among OVC setters. Marsellis helped marshal the Austin Peay offense to a .199 attack percentage that was fourth-best among OVC teams.

However, Marsellis put in a claim as one of the league’s most versatile setters. She had 165 kills at an impressive .249 attack percentage when she moved over into the outside hitter spot. She also tacked on 271 digs (2.24 per set), 29 service aces and 56 blocks as she played.

“I’m pleased Aubrey has gotten recognition in the preseason poll,” said Austin Peay head coach Taylor Mott. “I believe she gets overlooked as a setter because she sets and hits. Aubrey’s importance to us is much more than as a setter.” 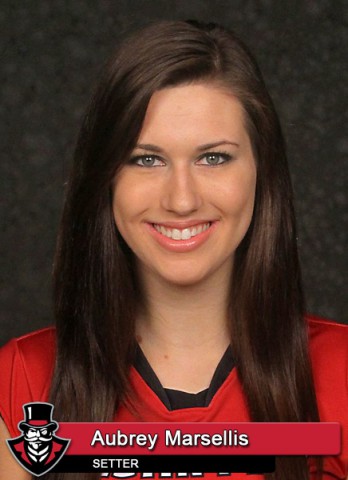 Austin Peay’s eight-place spot in the preseason poll was no different from its finish last season. Murray State, the 2014 regular-season and tournament champion, was picked to win the title again with 20 first-place votes and 240 points. Belmont followed with 216 points and four first-place votes. Eastern Illinois rounded out the preseason top three with 173 points.

“As a coach it’s easy to say you don’t put much stock into preseason polls,” said Mott. “We will be a younger team with freshmen filling out almost half the roster. The first three weeks of the season will be important for us to come together as a unit and prepare for the OVC schedule. I believe we will surprise a few teams this season.”

Austin Peay began its preseason preparation with a Tuesday morning practice. Eight student-athletes return from last season’s squad, including six of its top seven hitters, and APSU adds six newcomers to that group for 2015. However, APSU will have to replace Jada Stotts, who led the team with 408 kills (3.49 per set) in her final season of eligibility.

The regular season begins with a 3:00pm, August 28th contest against Ohio at the Purdue Mortar Board Tournament. Austin Peay opens its home schedule with a September 1st contest against Evansville – its first opening week home opener since 2008.