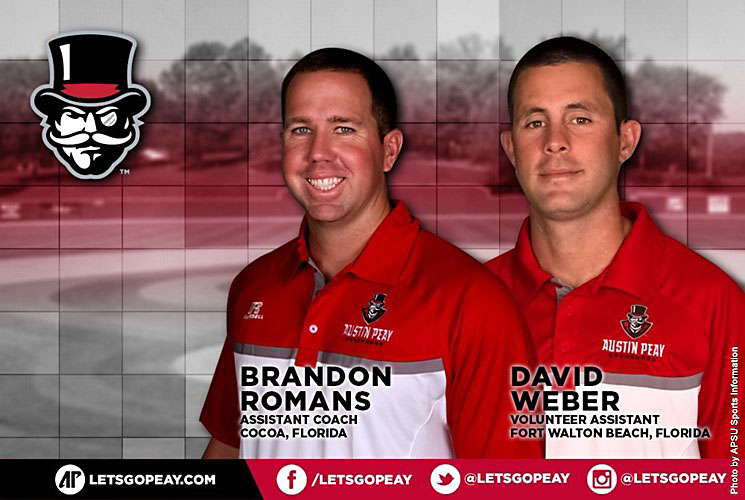 Romans will be the Governors recruiting coordinator, hitting and outfield coach. Weber will assist with the Govs catchers, team and camp operations. 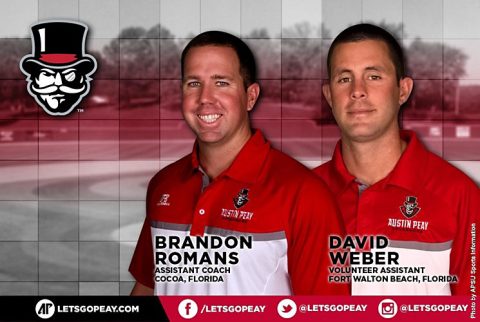 “Our baseball program has added two quality assistant coaches over the last month,” said Janssen. “Brandon and David are both first class coaches, but more importantly they are first class people. They will represent everything that is right about being a part of a top-shelf athletic department.

“Along with (pitching coach) Greg Byron, our staff will be about players’ development both on and off of the field. I believe college baseball will be hard-pressed to find a staff that has more energy and passion. I can’t wait to get the year going working side by side with these guys.”

Romans comes to Clarksville after his second coaching stint at Central Florida. He was responsible for catchers, outfielders and hitting for the Knights last season. Romans began his coaching career with UCF as a volunteer assistant during the 2010-12 seasons.

The Cocoa, Florida native is no stranger to the Ohio Valley Conference, previously spending three seasons at Jacksonville State (2013-15). As an assistant coach with the Gamecocks, Romans was responsible for catchers, outfielders and hitting while also serving as recruiting coordinator. He was on the staff during JSU’s impressive 2014 OVC Baseball Tournament championship that saw the team win six consecutive elimination games to claim the title and a NCAA Regional berth.

“Brandon is known in college baseball as a top-notch recruiter and hitting coach,” Janssen said. “He’s a positive-energy guy that our players will love playing for. He has coached numerous players that have moved on to professional baseball, has experience recruiting and coaching in the OVC and also has been a part of teams that have participated in NCAA regionals — all things that will be great for our program. From his playing career on, he’s had the privilege of playing and coaching under some of the finest coaches in the business. Brandon is a winner, I couldn’t be more excited to add him to our coaching staff.”

In his first coaching stint at Central Florida, he helped UCF record a 45-win season in 2012. That impressive mark included a program-record 16 victories in Conference USA play and the nation’s best road winning percentage (16-3, .842). The Knights reached the NCAA Coral Gables Regional finals.

A 2009 graduate of Central Florida, Romans batted .314 during his three-year career at UCF. In his final season with the Knights, he batted .333 with 14 home runs and 49 RBI and was named to the Johnny Bench Award Watch List.

Weber joins the Govs after serving as an assistant coach and recruiting coordinator at Northwest Florida State College in 2016. While with the Raiders, he had the opportunity to coach NJCAA Division I First-Team All-American Hunter Tackett.

The time in Florida followed three seasons at Northeastern State, where he was a player for Janssen before becoming a graduate assistant coach. In 2015, he helped with hitting instruction and worked with catchers and outfielders in his first coaching position. Weber followed that by serving as head coach of the Vail Vipers of the Mountain West Summer Collegiate Baseball League, leading that team to a league runner-up finish.

“David comes to us from one of the best junior college programs in the country,” said Janssen. “After winning a junior college national championship in 2015, Northwest Florida State hired him to be their recruiting coordinator.”

During his collegiate career, the Fort Walton Beach, Florida native helped Northeastern State reach the postseason in back-to-back seasons (2013-14) as a utility player – playing catcher, all three outfield positions, second base and designated hitter in his 104-game career. Weber was a career .318 hitter with the Riverhawks with 58 RBI and 74 runs scored. He began his collegiate career at Northwest Florida State.

“David was a student-athlete while I was at Northeastern State and during his senior year he was named ‘Team Captain.’ As a program we didn’t automatically name captains, it was something that we didn’t want to throw around lightly. It was obvious to everybody in the program that he deserved to hold that distinction. Those leadership skills have already translated in his coaching career. Our guys will love playing for David.”

Austin Peay returns 19 players, including 15 letterwinners, from last season’s squad that finished third in both the OVC regular-season race and tournament. The Governors will return four offensive starters and its entire weekend pitching rotation for the 2017 campaign which starts February 17th – 192 days away.