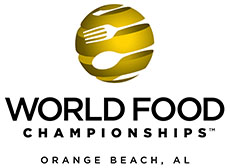 Orange Beach, AL – When I arrived at the World Food Championships, I had no idea what this was all about. I had to “bone up” on the sport of competitive cooking so I could cover it properly.

I’ve covered everything from baseball to golf, football to basketball, but I’ve never been up close and personal with this type of event, and let me just say..

The World Food Championship brings the heavy hitters to Orange Beach, and is the largest competition in Food Sport where champions of previous events convene for a chance to win the ultimate food title.

Today I just watched and listened. I don’t know who these competitors are, but when they arrive, everybody else does and they draw quite a crowd. 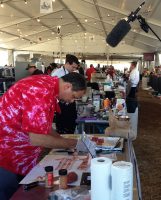 They’re the “rock stars” of this sport and the best of the best are here.

Each category is scheduled at various times each day and must make two dishes that are judged. Winners are announced at the end of the day.

The Final Table face off will have all of the winners brave a dish-by-dish elimination in front of a live audience and a panel of culinary judges who will then decide who wins the grand prize.

If you’re a “foodie” this is THE event for you. 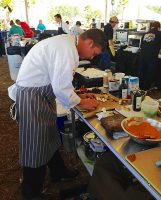 Even if you’re not familiar with the competition, it’s a fun event to attend.

There are a number of vendors at the venue, entertainment and more, all set on the grounds of The Wharf in Orange Beach.

I met a lot of really wonderful people today, including a number of TV hosts of regional and national food programs. I also mingled with fans of the competition and family members of some of the competitors.

Now, for my favorite part. 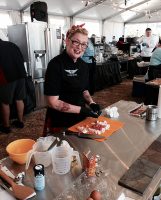 t the conclusion of each round of competition, each competitor brings a sample of his or her dish to the V.I.P/Media tent and we all get to sample their individual creations.

I sampled some of the finest steak and seafood I have ever eaten today and I haven’t had to pay for a meal since I’ve been here.

I could really enjoy covering more of these events, but I’m afraid I would explode.

So tomorrow brings more competition, including Burgers and if I play my cards right, I won’t have any food receipts to turn in to management for reimbursement.

About the World Food Championships

The World Food Championships is the largest competition in food sport, where champions of previous events convene for a chance at winning the ultimate food crown and a share of $300,000. The World Food Championships platform ranges from live-event integration and acivations to a robust multimedia platform that serves culinary stars, home cooks, brands and destinations.