Austin Peay (22-25) faced a daunting 11-6 deficit entering its half of the ninth inning. The Govs began chipping away at that deficit as the first six batters reached base safely.

Catcher Parker Phillips, right fielder Brett Newberg and second baseman Max Remy each delivered a RBI base hit. A Bisons wild pitch delivered the inning’s fourth run and the Govs trailed by only a run, 11-10 with no outs.

After pinch hitter Tyler Hubbard singled, Lipscomb (26-20) dipped into its bullpen and called on Dayton Tripp to try and close the door for reliever John Pryor. The Govs initially played for the tying run as shortstop Garrett Giovannelli used a sacrifice bunt to move the two runs into scoring position.

The Bisons responded by intentionally walking left fielder Cayce Bredlau, who had two home runs earlier in the contest, to load the bases. Robles took one pitch from Pryor before driving a 0-1 offering over the wall in left for a game-winning grand slam. 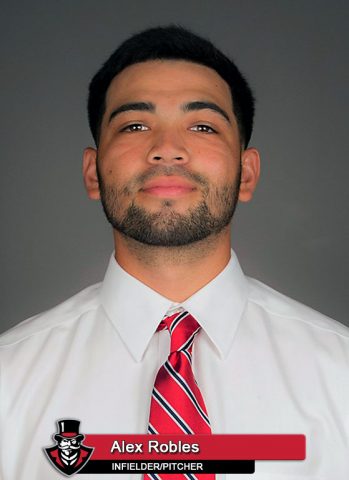 It was Robles’ second walk-off home run this season and came nearly two months after his first, March 12th against Jacksonville State. Coincidentally, it was the 73rd home run by the Governors this season, breaking a 16-year old record.

The late Govs rally made a winner of reliever Tyler Thompson (1-1), who notched his first collegiate win after tossing a scoreless top of the ninth.

Robles’ grand slam highlighted a 2-for-6, four RBI outing. Bredlau hit a home run in each of his first two at-bats and finished the day 2-for-5 with three RBI.

In addition, Phillips followed a 5-for-5 outing, Tuesday, with a 3-for-4, three RBI performance that included a home run in Wednesday’s outing. Remy’s ninth-inning RBI single capped his 4-for-5 outing as the Govs finished with 15 hits in the win.

Lipscomb’s Pryor (3-2) suffered the loss after allowing all six batters he faced to reach base, all six eventually scoring.

Offensively, second baseman Hunter Hanks, who went 2-for-4 with three RBI, hit a two-run home run as part of a five-run third inning that gave the Bisons an early 5-2 lead. Third baseman Zeke Dodson followed Hunter’s home run with one of his own in the third and was 1-for-5 at the plate.

How did Alex Robles end his final appearance at Raymond C. Hand Park? With a walk-off grand slam.