Nashville, TN – On Sunday, June 18th, 2017, Sebastian Alexander Motes received a special honor from the House of Representatives of the One Hundred Tenth General Assembly of the State of Tennessee. House Resolution No. 172 was presented to Sebastian by Representative Joe Pitts during the morning worship service at Bethel Cumberland Presbyterian Church.

The resolution was adopted by the House of Representatives on May 9th during Sebastian’s tenure as a legislative page to commend his outstanding service to the One Hundred Tenth General Assembly.

Sebastian is fourteen years old, and is a student at Austin Peay State University, Nashville State Community College, and the Middle College at APSU.

He is concurrently working toward high school and university graduation, and would like to pursue a career in electrical and mechanical engineering.

He volunteers extensively with various school and community organizations, and was recently accepted to the Montgomery County Mayor’s Emerging Leaders Program.

A Resolution to commend Sebastian Alexander Motes for exemplary service as a legislative page.

Whereas, each legislative session this body is pleased to recognize certain persons who have committed themselves, through their adroit service, to the betterment of the legislative process; and

Whereas, Sebastian Alexander Motes is one such individual who has distinguished himself in his role as a page for the One Hundred Tenth General Assembly; Mr. Motes’s work has resulted in innumerable benefits for the legislators he assisted and the General Assembly as a whole; and

Whereas, Sebastian Motes is the fourteen-year-old son of David Motes and Kelly Motes and the brother of Hannah Motes; his beloved dog is Georgia Peach; and

Whereas, Mr. Motes is a Middle College student at Austin Peay State University, where he is registered as a sophomore; he enjoys studying programming from the Massachusetts Institute of Technology and currently works on designing robots in his free time while also focusing on research to better aircraft exteriors using calculus; and

Whereas, Sebastian Motes is not only an exemplary student; he is also an avid participant in such activities as piano and Boy Scouts and serves as a mentor for STEM Scouts; and

Whereas, Mr. Motes exhibits his devout religious faith at Bethel Cumberland Presbyterian Church, where he is a member of the youth group; and

Whereas, eager to familiarize himself with Tennessee state government and to further his knowledge, Sebastian Motes brought his many abilities to Capitol Hill for the One Hundred Tenth General Assembly, where he served as a page for Representative Joe Pitts every Monday night; and

Whereas, throughout his tenure with the General Assembly, Mr. Motes has surpassed all criteria that define a devoted and conscientious legislative page; and

Whereas, Sebastian Motes has performed his many duties with extraordinary insight and rare decorum; now, therefore,

Be It Resolved BY THE HOUSE OF REPRESENTATIVES OF THE ONE HUNDRED TENTH GENERAL ASSEMBLY OF THE STATE OF TENNESSEE, that we hereby commend Sebastian Alexander Motes for outstanding service as a legislative page for the One Hundred Tenth General Assembly and extend to him our best wishes for every future success.

Beth Harwell
SPEAKER OF THE HOUSE OF REPRESENTATIVES 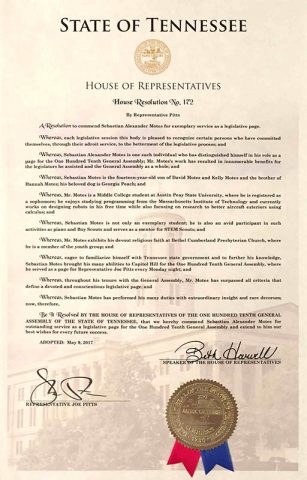