Clarksville, TN – Houses were packed to capacity, Broadway World called it “one of the year’s most unforgettable performances,” and audiences have been begging for more ever since.

In this rocking ride with music and lyrics by Stephen Trask, Hedwig’s outrageous and unexpectedly hilarious story is dazzlingly performed in the form of a rock gig/stand-up comedy routine backed by the hard-rocking band “The Angry Inch,” featuring Matthew McNeill on piano, Jarrod Jackson on guitar, John Waddle on bass, and Thad Wallus on drums. Sara Fetgatter, last seen on the Roxy Regional Theatre stage as Linda in The Wedding Singer, returns as Hedwig’s husband and back-up singer, Yitzhak. 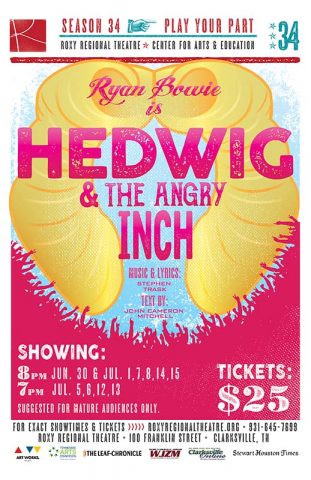 Aiming to tear down conventional boundaries while addressing such themes as gender identity and the quest for love, “Hedwig and the Angry Inch” is funny, touching and ultimately inspiring to anyone who has ever felt life gave them an inch when they deserved a mile. Due to language and adult content, this production is recommended for mature audiences only.

“Hedwig and the Angry Inch” is made possible in part through the generous support of Larry & Barbara Goolsby and Melinda Kelly-Major.

Performances run June 30th through July 15th on Wednesdays and Thursdays at 7:00pm and Fridays and Saturdays at 8:00pm.

Friday, June 30th, is the traditional pay-what-you-can preview of “Hedwig and the Angry Inch”. All tickets not pre-sold at the regular ticket price will go on sale at 7:30pm that evening for a $5.00 minimum donation.

Tickets are $25.00 and may be reserved online at www.roxyregionaltheatre.org, by phone at 931.645.7699, or at the theatre during regular box office hours (9:00am to 2:00pm, Monday through Friday, and one hour prior to curtain). Military, APSU students and CitySaver coupon holders can receive two tickets for the price of one to Wednesday and Thursday performances during the run.