Marine recruit from Nashville tests on confidence on Parris Island 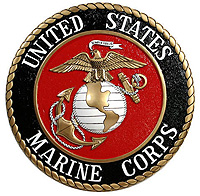 “I wanted to better myself and become a stronger person,” said Robinson. “Joining the Marines was a way to put my life back on track and give me the discipline and strength to push through any hard times later in life.”

The symbolic Eagle, Globe and Anchor emblem and the title Marine are earned only by those who successfully complete each of seven graduation requirements and embrace the Corps’ core values of honor, courage, and commitment.