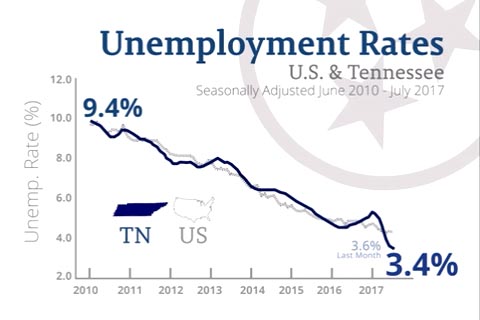 Nashville, TN – Tennessee Department of Labor and Workforce Development (TDLWD) Commissioner Burns Phillips announces the state has made history for the second consecutive month with a record-setting preliminary unemployment rate of 3.4 percent for July 2017.

This exceeds the previous month’s revised rate of 3.6 percent by two- tenths of a percentage point.

“A continuing decline in the state unemployment rate is great news for all Tennesseans,” said TDLWD Commissioner Burns Phillips. “Governor Haslam made job creation a top priority in the state and the hard work of numerous state departments is moving Tennessee toward that goal.”

“However, it doesn’t matter how low the unemployment rate is if you are out of work.” Commissioner Phillips commented. “That’s why we are not letting up on the push to create new jobs across the state and help improve the quality of life for Tennessee families.”

Between June and July, total nonfarm employment has increased 4,700 jobs. 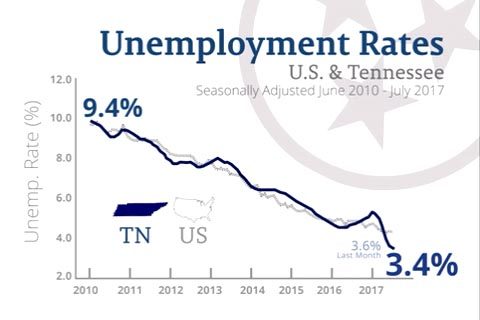 During highly seasonal months, state and county unemployment rates may move in opposite directions. This discrepancy is because the state unemployment rate is adjusted to remove seasonal influences such as the opening and closing of schools, holidays, and weather. County rates are not seasonally adjusted and thus reflect these seasonal fluctuations.

The Economic Analysis and Labor Force Estimates are prepared by the Employment Security division’s labor market information specialists. The division reports metrics and contextual information as it relates to employment, income, and population in Tennessee.