She is the second Austin Peay volleyball athlete to receive Academic All-America honors, joining APSU Athletics Hall of Fame member Isabel Candeo, who was a third team selection in 1992.

A two-time CoSIDA Academic All-District™ pick, Stucker also was one of six Ohio Valley Conference Scholar-Athlete honorees. The OVC Scholar-Athlete Awards are the highest individual honor that can be earned by OVC student athletes and are given annually to three men and three women for their accomplishments in both the classroom and athletic arena and because of their leadership abilities. 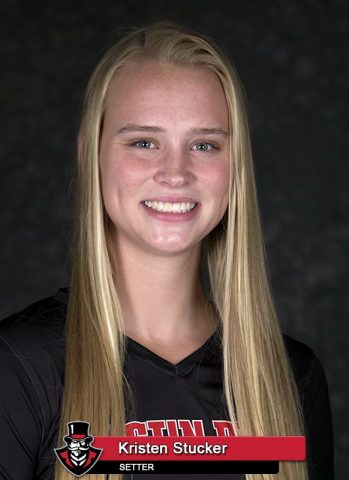 Stucker capped her junior campaign at Austin Peay by leading the Governors to the NCAA Division I Volleyball tournament for the first time since 2010. On the way, she was named the league’s Setter of the Week an astounding 10 times and ultimately was named both Setter of the Year and First-Team All-OVC for a second-consecutive year.

She became the first Governors setter to record more than 1,500 assists during a season and ranks third among all Division I setters with 1,508 assists as the postseason enters its second week. Her 11.42 assists per set ranks 15th nationally and held the Govs record a .236 team attack percentage that was second-best in program history and 66th nationally.

Off the court, Stucker’s accomplishments in the classroom are fast becoming legendary in their own right. A two-time OVC Academic Medal of Honor recipient and Commissioner’s Honor Roll awardee, she’s been on the president’s list, dean’s list and athletics director’s honor rolls each semester of her Austin Peay career, carrying a 4.0 grade-point average as a dual-major in biology and agriculture with a chemistry minor.

And in extracurricular services, few student-athletes can match Stucker’s résumé. She is a member of Phi Kappa Phi Honor Society, the nation’s oldest and most selective multidisciplinary collegiate honor society. Stucker also is a member of the Beta Beta Beta biology honor society, APSU’s pre-veterinary club and pre-professional health society. She also works in the athletics department as a tutor.