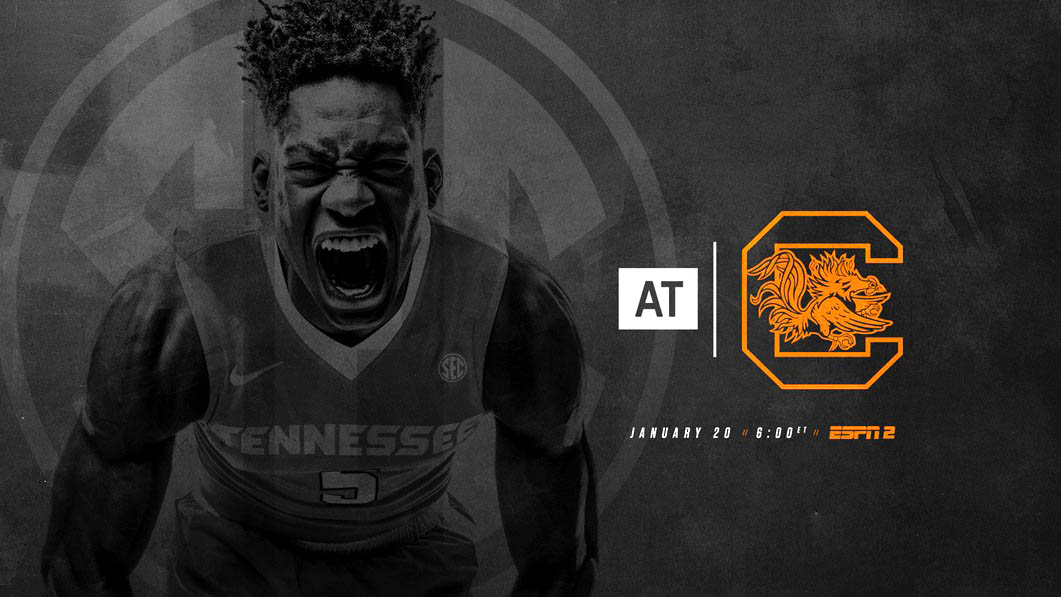 Columbia, SC – After a loss on the road Wednesday, the 21st-ranked Tennessee Volunteers will look to bounce back with a win over South Carolina at Colonial Life Arena on Saturday, January 20th, 2018. The game will tip at 5:00pm CT and will be televised live on ESPN2 and streamed online via WatchESPN.

The Vols (12-5, 3-3 SEC) rallied back from a 10-point deficit with less than seven minutes remaining against Missouri earlier in the week but fell short after a turnover in the finals seconds of the game. 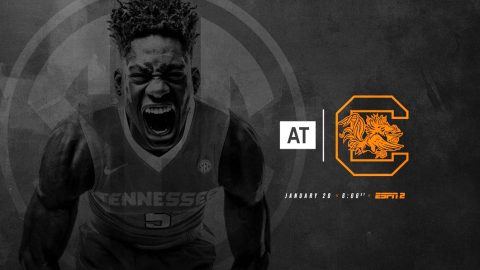 Kyle Alexander has stepped up during the past two games, posting back-to-back double-digit performances for the first time in his career, including a career-high 14 points against Texas A&M.

At Mizzou, he finished with 12 points on 6-of-6 shooting to go along with four rebounds and three blocks.

However, USC enters Saturday’s matchup riding a two-game winning streak, including a 14-point, second-half comeback to defeat No. 18 Kentucky behind the play of forward Chris Silva, who tied a career-high with 27 points and grabbed eight boards.

After Saturday night’s showdown, the Vols return home for their second meeting with the Vanderbilt Commodores on January 23rd at 6:00pm UT then heads to Ames, Iowa, to face Iowa State as part of the Big 12/SEC Challenge on January 27th at 4:00pm. Both games will be televised on ESPNU.

In SEC games, reigning SEC Player of the Week Grant Williams is tied for third in the league with a scoring average of 18.8 ppg.

Junior Kyle Alexander is 11-for-12 from the field over UT’s last two games for 26 total points. The Vols are rated No. 14 in the NCAA RPI and own the nation’s fifth-rated SOS, per ESPN.

Give the Big Orange seven wins over teams occupying a top-100 spot in the current NCAA RPI.

In his sixth season at the helm, Frank Martin has South Carolina (12-6, 3-3 SEC) trending in the right direction, sitting at 47th in the latest RPI standing. Last season, the Gamecocks advanced to their first Final Four and won a program-record 26 games.

However, USC lost three starters from that team, including SEC Player of the Year Sindarius Thornwell. The two returners are junior forward Chris Silva and sophomore forward Maik Kotsar.

South Carolina struggled early on in the season, dropping contests against Clemson, Illinois State, Temple and Virginia Tech during non-conference play. The Gamecocks then lost three of their first four to begin their SEC slate but enter Saturday’s matchup riding a two-game winning streak.

After going on the road to get a win at Georgia, South Carolina returned home and erased a 14-point, second-half deficit to upset No. 18 Kentucky, 76-68. Silva matched a career-high with 27 points and grabbed eight boards to pace USC.

Tennessee struggled from the field against the SEC’s top-rated defense, suffering an 82-55 defeat at South Carolina on February 25th, 2017. Senior guard Robert Hubbs III was the only Volunteer to finish in double figures, scoring 16 points on the afternoon.

Looking to get back on track after a home loss to Vanderbilt three days prior, the Vols got off to a rocky start, committing five turnovers over the first four minutes of action. Those miscues allowed South Carolina to race out to an early 8-2 lead—an advantage that would grow to as many as 27-9 after a pair of 8-0 runs.

UT looked poised to maintain the momentum after halftime, whittling the deficit to four after a coast-to-coast layup from Hubbs. But not long thereafter, South Carolina got back-to-back 3-pointers from Duane Notice, opening up a 12-3 run that restored the Gamecocks’ lead to double figures and ultimately put the home side out of reach for good.

Along with his eight points, Williams led UT with eight rebounds to go along with a season-high four steals. Admiral Schofield and Lamonté Turner—who made his fifth career start—finished with seven points apiece. Sophomore Kyle Alexander added five points and a team-high three blocked shots. UT finished with 20 turnovers and just three assists.

[320rihgt]The two squared off seven times as coaches in the Big 12 Conference, when Barnes was with Texas and Martin was at the helm at Kansas State. Martin owns a 7-4 edge in head-to-head meetings.

Martin accepted the head coaching position at South Carolina in 2012 and owns a 108-80 record with the Gamecocks, who advanced to the Final Four last season.

In SEC play, Tennessee leads the league in assists per game (15.3) while ranking second in scoring offense (79.2), assist/turnover ratio (1.4) and rebounding defense (32.7 rapg).
The Vols have 19 steals over their last two games.

Admiral Schofield has led the Vols in rebounding in each of the last four games (7.8 rpg), and he has 11 offensive rebounds during that span. He has been UT’s leader (or shared the lead) on the boards in seven of the last eight contests.

Admiral Schofield also leads the team with 20 total steals through 17 games. In his first two seasons combined, he totaled 21 steals in 61 games played.
In three of Tennessee’s last five games, a Vol has set a new career-high for scoring: 25 for Lamonté Turner vs. Auburn; 37 for Grant Williams at Vanderbilt; and 14 for Kyle Alexander vs. Texas A&M.

Junior forward Kyle Alexander is coming off back-to-back games with 10 or more points for the first time in his career. After a 6-for-6 shooting night at Missouri Wednesday, the Canadian big man is 11-for-12 from the field over UT’s last two games. He is averaging 13.0 ppg over that span.

In Tennessee’s win over Texas A&M on Jan. 13, Alexander scored a career-high 14 points, and he followed that up with 12 points on perfect shooting at Mizzou. The Missouri game Wednesday night marked the first time in Alexander’s career that the Vols lost when he scored in double-figures (4-1).